The black hole was choked by a star 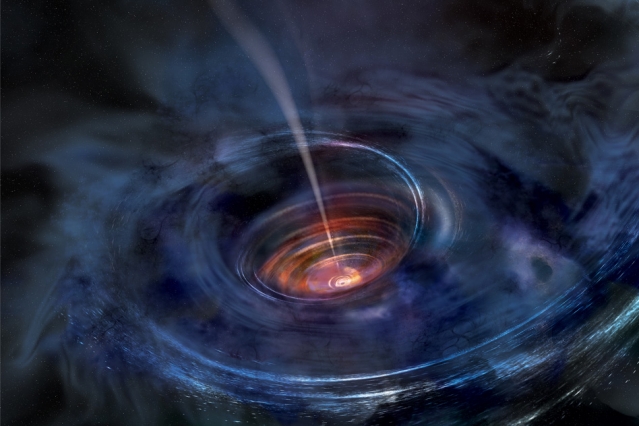 In the center of a distant-distant galaxy 300 million light-years from the Earth is a supermassive black hole “suppressed” by the substance of the absorbed star.

In a paper published in the journal Astrophysical Journal Letters, researchers from the Massachusetts Institute of Technology, NASA and other research organizations describe the “tidal flash” – a sudden ejection of electromagnetic radiation, usually occurring when a black hole absorbs another celestial body. The flash was first recorded in 2014, and since then scientists have systematically sent telescopes toward the black hole in order to study the processes that accompany the growth and evolution of similar ones.

As the doomed star fell on a black hole, the researchers observed small fluctuations in its radiation in the optical and ultraviolet ranges of the electromagnetic spectrum. Approximately the same picture was observed about 32 days later, but already in the x-ray range.

Using computer modeling, researchers were able to establish the most likely scenario explaining these anomalies: a star approaching the horizon of black hole events was torn by tidal forces, and the debris of the star, moving in a spiral toward the black hole, began to collide with one another, which led to the emergence Flares in the places where the collision of the star fragments occurred. Thus, the black hole as if could not quickly absorb the captured fragments and began to “suffocate” from them, the researchers note.

Observing the events of destruction by tidal forces is almost the only way to detect a black hole: they exist in almost every large galaxy, but they are not visible in telescopes until they begin to absorb bright objects, and this happens every 10 to 100 thousand years. Therefore, each such event is an opportunity to learn more about black holes, the authors of the study note.