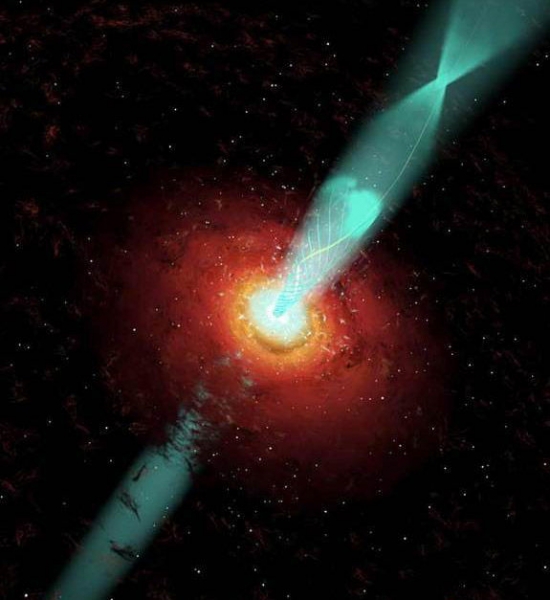 The blazers represent galaxies where the Central supermassive black holes pull matter from nearby regions of outer space.

While this behavior is typical of black holes in many galaxies and situations, in the case of the blazar falling into the black hole matter is ejected in the form of a powerful, narrow stream of charged particles aimed in our direction. These charged particles form the gamma photons, and each photon is characterized by energy, hundreds of millions of times greater than the energy of the high-energy x-ray photons observed by the space Observatory of NASA “Chandra”.

Blazar 1ES1741+196 was first seen in 1996 with the help of x-ray satellite “Einstein”. Additional observations allowed to determine that it is a triple system consisting of an elliptical galaxy, two galaxies-companions. The gravitational interaction between these objects can have an impact on the system of the emitted gamma rays.

In the new study, the researchers headed by A. Yu Abeysekara from the Harvard-Smithsonian astrophysical center, USA, with the help of a monitoring system of gamma-ray objects called VERITAS (Very Energetic Radiation Imaging Telescope Array System) has received data on the basis of which a model was produced that dim gamma-ray blazar. According to this model the formation of the gamma-ray blazar lead only two processes: the direct radiation gamma photons and electron scattering by other photons with initially lower energies. The team successfully built a model using only these two types of processes.

The study was published in the journal Monthly Notices of the Royal Astronomical Society.