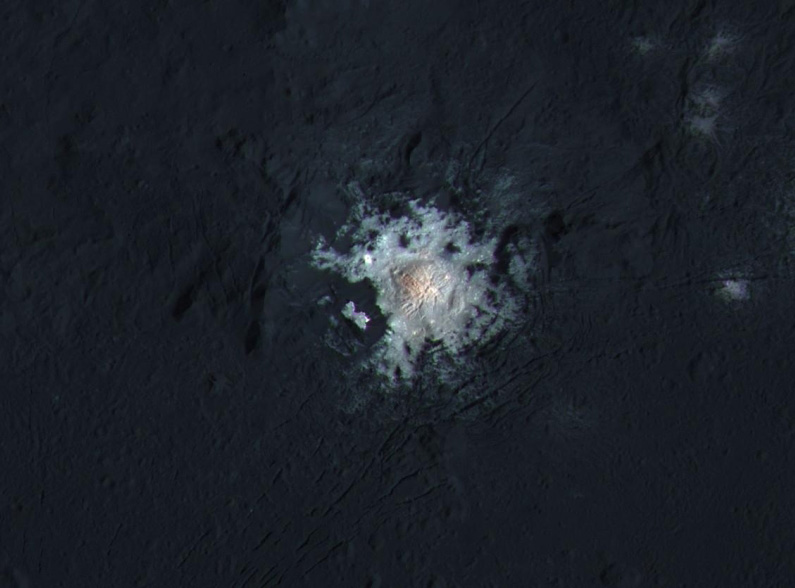 A bright spot on the surface of the dwarf planet Ceres in the crater Okkator has the highest because the concentration of minerals of carbonates. These are the results of studies conducted by scientists in the NASA mission Dawn.

“We first observed this kind of substance to another region of the Solar system in such quantities,” – says Maria Cristina De Sanctis from the National Institute of astrophysics in Rome.

Okkator – an unusual education. This is a fairly young crater. He’s only about 80 million years. The diameter of the crater is 92 km, while the diameter of the Central recess is 10 km away. the Dome structure in the center covered with a substance with a very high level of reflectivity. The Central part has a concentric and radial cracks.

NASA scientists found out that the main mineral in the bright areas of the crater is sodium carbonate. On Earth this kind of salt found in the region of hydrothermal vents. According to the researchers, this compound appeared from the bowels of Ceres since fallen on the dwarf planet of the asteroid could not bring. The presence of such minerals on the surface indicates that the temperature is within the Ceres above, than was considered still. 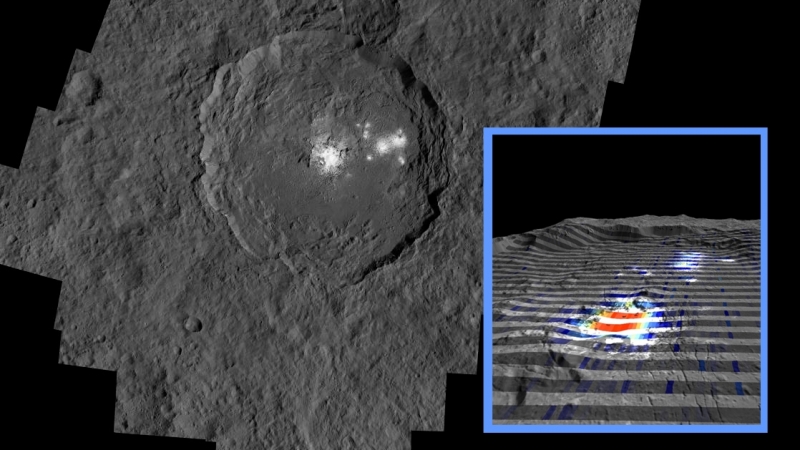 Perhaps the collision of an asteroid with the dwarf planet has contributed to the ingress of sodium carbonate on the surface, however, its role was played by the processes taking place inside Ceres. Even more intriguing sounds the assumption about the possible presence of liquid water beneath the surface of the dwarf planet in a recent geological period. Salt may indicate the existence of the ocean, or separate reservoirs, from which water could get to the surface and freeze millions of years ago.

To detect the presence of carbonates on Ceres helped data spectrometer apparatus Dawn. Last year the same group of scientists reported the presence of ammonia phyllosilicate on the surface of Ceres. Since a lot of ammonia in the outer region of the Solar system, scientists have suggested that Ceres could have formed near the orbit of Neptune, and then migrate closer to the Sun. Interestingly, the sodium carbonate and sodium bicarbonate found in the Okkator, had been found in the geysers of Enceladus – moon of Saturn.