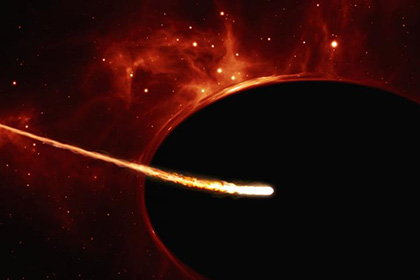 The brightest of known supernew was actually black hole which has absorbed a star. It was assumed by scientists from Weizmann Institute of Science in Israel and the Center of studying of dark matter and dark energy in Denmark.

ASASSN-15lh object registered by astronomical service All Sky Automated Survey in 2015 has been defined as the brightest supernew for all history of observation. Astronomers have assumed that the flash observed by them has been caused by explosion of the dying massive star. Its luminosity surpassed the total light stream radiated by the Milky Way by 20 times. Supernew was in the galaxy remote from Earth on four billion light years.

The scientists observing ASASSN-15lh within 10 months after flash have come to a conclusion that not the supernew, but supermassive black hole could be a source of radiation. She by means of tidal forces has destroyed the star of the size of the Sun which has appeared in dangerous proximity, and remains of a space body have created an accretionary disk. The last, according to astronomers, became a source of intensive radiation.

Though the black hole is the most probable explanation, scientists don’t deny that other causes of ASASSN-15lh are possible.