The Chinese are working to create a powerful ion engine 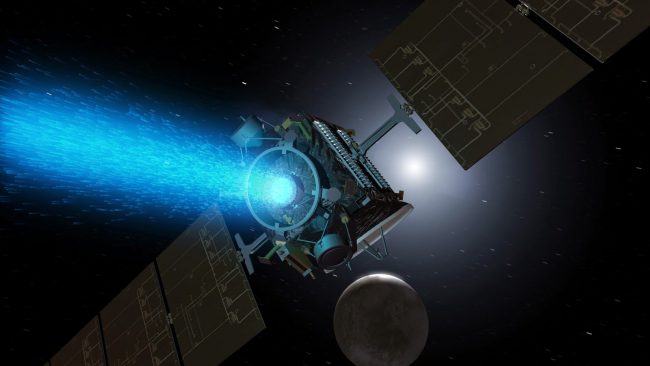 To overcome large distances during space travel, modern rocket engines, which are used during flights beyond the terrestrial atmosphere, are not entirely suitable. They are very massive and consume a huge amount of fuel, so the development of fundamentally different “space motors” has been conducted since the middle of the last century. One of the ways of development can be the construction of an ion engine. And, according to the publication of the Physics of Plasmas, Chinese engineers have been able to achieve significant success in this industry.

As they say in the article, scientists from China have developed a new method of ionizing the gas and heating it in an ionic engine, which can increase the thrust force by about 50% with the same amount of fuel. According to Likyu Wei from the Harbin Institute of Technology,

“We must understand that we have only shown that gas can be passed through the engine in this way. We still have to check how the angle of inclination, diameter and other parameters of the outlets affect the efficiency of work. ”

The use of ion engines on space vehicles has many advantages. For example, they have high efficiency and low fuel consumption. On the other hand, the thrust produced by them is extremely small due to design features, and because of this, acceleration and deceleration is slow. Chinese experts have perfected the work of one of the most technologically advanced versions of the ion engine – Hall accelerators. They work by the fact that the electric field produced by this device generates and accelerates ions, causing their flow, moving at a speed of tens of kilometers per second, to “push” the spacecraft in the opposite direction. The electrons inside the magnetic field cause the atoms of xenon or any other noble gases to turn into ions, and then accelerate and neutralize them after they have left the nozzle of the engine.

“The main problem of the Hall motors is that not all of the atoms of gas passed through the chamber with electrons are converted into ions. This significantly reduces the efficiency and reduces its traction, especially if the gas is thin and moves quickly. ”

To remedy this deficiency, the scientists proposed a rather elegant solution: to change the shape of the nozzles, from which the gas enters the working chamber of the engine, in such a way that the gas jet will move not perpendicular to the thrust direction, as in conventional engines, but will spiral into a spiral. In the course of calculations it was found out that such a method would increase the efficiency by 1.5 times. In the near future, scientists plan to create the first experimental prototypes of new type engines and test them in the orbit of our planet.