The closest exoplanets to us were volcanic worlds 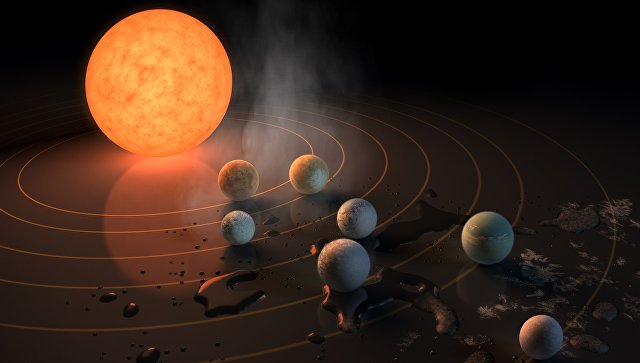 The four planets in the TRAPPIST-1 system, the “family” of the Earth’s closest analogues, turned out to be more similar to Io, the satellite of Jupiter, or Venus, than to our planet, as volcanoes almost constantly erupt on their surface, the article published in journal Nature Astronomy.

“The planets in the TRAPPIST-1 system revolve around a red dwarf of class M, a very small, fast rotating star with a strong magnetic field, joking that such a strong field can melt a spoon on the surface of these planets.” Then we realized that something the same can happen inside them, as their entrails conduct current, “- said Christina Kislyakova of the University of Vienna (Austria), whose words lead publication Newsweek.

In May last year, astronomers from MIT announced the discovery of an extremely unusual star system in the nearest Earth District – TRAPPIST-1, which was only 40 light-years away from us in the direction of the constellation of Aquarius. All three planets revolving around this red dwarf are inside the so-called “zone of life” where water can exist in liquid form, and presumably have a mass comparable to that of the earth.

Later, scientists studied the spectrum of TRAPPIST-1 star beams, trying to study the composition of the atmosphere of its planets, and they unexpectedly discovered that they were actually not three, but seven, six of them within the zone of life. All these planets have almost “terrestrial” dimensions and have a Martian or terrestrial climate, with the exception of the first planet, TRAPPIST-1b, more like Venus than Mars or Earth.

The same observations revealed a curious phenomenon – it turned out that the rotation of all the planets around the star was synchronized with each other. For example, the planet TRAPPIST-1b made two turns for the time that its “neighbor” TRAPPIST-1c spent one turn, TRAPPIST-1h flew around a red dwarf for 13 “years on TRAPPIST-1b, and so on.

Gravitational interactions of the planets that generate such synchronization have one important “side effect” – they heat their subsoil and significantly increase the temperature inside and on the surface of similar celestial bodies. This fact, as well as the presence of a powerful magnetic field in the star TRAPPIST-1, exceeding the similar characteristic for the Sun by approximately 600 times, led Kislyakova and her colleagues, including scientists from the Nizhny Novgorod Institute of Applied Physics of the Russian Academy of Sciences, to calculate the strength of both effects .

As it turned out, the magnetic field strength of the star in some cases is enough to completely melt the mantle of the first four planets of the system and turn them into volcanic worlds like Io, the satellite of Jupiter, on whose surface volcanic eruptions occur almost continuously.

In the “best” case, these planets, as astronomers note, will turn into Venus analogues, as the increased activity of volcanoes will lead to saturation of their atmosphere with carbon dioxide, sulfur dioxide and other greenhouse gases. The planet TRAPPIST-1c and TRAPPIST-1d, which are virtually guaranteed to be volcanic worlds covered by oceans from incandescent magma, will suffer most from this.

On the other hand, the planets f and g, which are considered today the most likely candidates for the role of potential “Earth twins”, these processes are almost not affected in the first five billion years of existence, since they are located at a sufficiently large distance from the star.

This does not necessarily mean that life there can exist – its origin can be hampered by the fact that a strong magnetic field and the solar wind of a red dwarf can “rip” the atmosphere from planets f and g and make them fundamentally uninhabitable a few billion years after their formation .