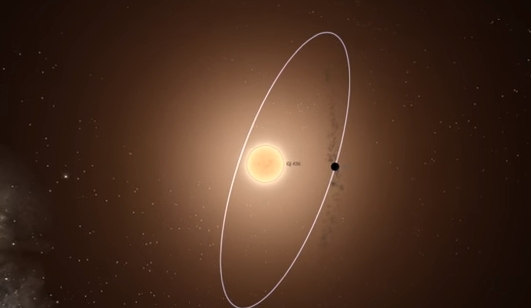 Scientists from the University of Geneva found that in the planetary system GJ436 the planet does not move in the plane of the ecliptic, like planets in the solar system, but in a strongly inclined orbit.

The planet behaves like a comet. GJ436b evaporates, leaving behind a tail consisting mainly of hydrogen atoms. In size, it resembles Neptune. The object, located at a distance of 33 light years from the Earth, was opened in 2004.

The planet GJ436b experiences a very strong gravitational effect of the star. It is 33 times closer than the Earth from the Sun, because of which the temperature of its surface is about 712 Kelvin, reports Phys.org. In addition, it has an elliptical orbit.

The star around which the GJ436b is drawn is a red dwarf, that is, the life expectancy of a luminous moon is quite large. Therefore, if the planet were to turn around a long time, the planet’s orbit would take a more round shape due to a strong gravitational effect. However, this did not happen. A similar phenomenon could explain the existence of another unknown massive planet. Perhaps, it will be possible to open it in the future, consider astronomers.