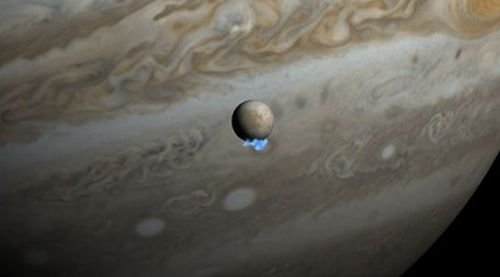 Computer simulations conducted recently by representatives of NASA, indicates that part of the ocean of Europa, a natural satellite of Jupiter may be favorable for the development of intelligent life.

Scientists continue to conduct studies in which the main subject is a deep saltwater ocean on Europa, which, however, is hidden beneath a thick ice shell. If the theory of scientists confirmed that, in fact, a study can be done given the examples known on Earth. The researchers shared the text of his research in a popular science tabloid Geophysical Research Letters.

Primarily, the researchers conducted a comparative analysis of Europe’s potential for reproduction, in the natural environment of the satellite, hydrogen, and oxygen. The process, while not have to deal with volcanism, as such. Simulations showed that, as in Europe, and on the Earth, the oxygen production is about ten times the playback of hydrogen.

“We began to study the alien for us the ocean, using those techniques that have been developed specifically for understanding the movement of energy and nutrients in the Earth system. The cycle of hydrogen and oxygen in Europa’s ocean could become a cornerstone in understanding the operation of chemical processes”, – said Steve Vance, who heads up NASA involved in this study.

In the plans of Vance and his colleagues included the understanding of this cycle, as well as the potential detection of other substances. According to them, is a can be phosphorus, nitrogen, sulfur and carbon.