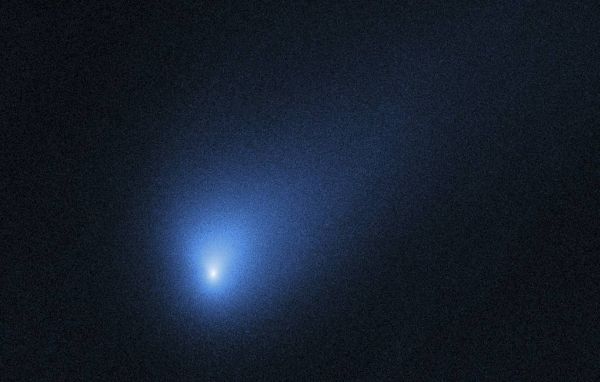 Astronomers from Moscow State University were the first to study the chemical composition of dust particles in the gas and dust tail of the interstellar comet Borisov. It turned out that almost all of these particles are composed of iron and magnesium silicates, as well as tolins – complex hydrocarbon compounds. This was told by Vladimir Busarev, a leading researcher at the Sternberg State Astronomical Institute of Moscow State University.

“Our measurements of the reflection spectrum of Borisov’s comet show that the comet’s nucleus produces many molecules of gases and nanoparticles. These emissions mostly consist of iron and magnesium silicates, as well as tholins, while nanoparticles of water ice are almost completely absent in them,” he said Busarev.

The first interstellar comet 2I / Borisov was discovered on August 30 last year by the Crimean astronomer Gennady Borisov. In size, chemical composition and speed, it is a relatively common comet. The diameter of its core is about a kilometer, and the comet itself contains a lot of dust and organic matter.

At the beginning of December last year, she approached the Sun at a minimum distance of 305 million km, and then began to return to the interstellar medium. Unlike the first such object, the asteroid Oumuamua, scientists discovered Borisov’s comet even before it had time to approach the Earth and the Sun. This gave time to prepare for its detailed study.

The chemical mysteries of an interstellar comet

In particular, Busarev and his colleagues were able to study in detail the spectrum of radiation that was reflected from the comet’s surface at the moment when it approached the Sun at a distance of about two astronomical units. For these observations, astronomers used an automated 60-centimeter RC600 telescope, which is installed at the Caucasian Mountain Observatory of Moscow State University at an altitude of 2,112 meters above sea level.

Scientists have compared these data with the results of theoretical calculations, which describe how particles of water ice and various forms of dust can affect the reflection spectrum of sunlight. As a result, it turned out that the comet’s tail was unexpectedly “dry” – there were no small or large ice particles, but there was a lot of silicate and organic dust.

As noted by the scientist, similar dust emissions are characteristic of the Churyumov-Gerasimenko comet, the tail of which astronomers have studied in detail using the instruments of the European probe Rosetta. He worked in comet orbit from 2014 to 2016. This feature of the first interstellar comet, coupled with a similar surface color, may indicate that the chemical composition and structure of 2I / Borisov and comet Churyumov – Gerasimenko are similar.