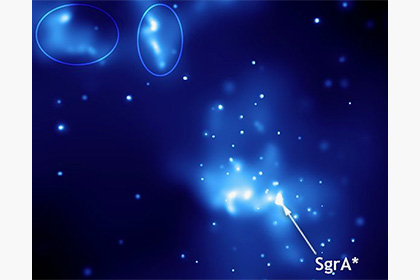 Physicists from the United States and France indicated a region of space near supermassive black hole Sagittarius A* located in the center of the milky Way, where the nonperturbative effects of quantum gravity should be maximized. The study is published on the website arXiv.org.

The effects of quantum gravity, is not amenable to description within the framework of standard methods of perturbation theory (i.e. in deperturbation mode), as shown by calculations of scientists, should be most visible at a distance of approximately seven sixth of the Schwarzschild radius from the center of a supermassive black hole.

The Schwarzschild radius determines the size of the object with a spherically symmetric distribution of matter, which is not able to leave the photons (moving at the speed of light quanta of the electromagnetic field). So determined swartzschild sphere identical to the concept of the event horizon, and limited its massive object — a black hole. Masses of black holes that occur at the final stage of evolution of the stars, comparable with the star. Supermassive black holes in the centers of galaxies the mass of the Sun millions of times.

Sagittarius A* is removed from the earth at a distance of 26 thousand light years, is located in the centre of the Galaxy and the mass of the Sun is four million times, and its Schwarzschild radius exceeds 12 million kilometers. In the observations the object manifests itself as a compact radio source with a radius twice as large parameter Schwarzschild.