The constellation of ultra-bright galaxies on Hubble images 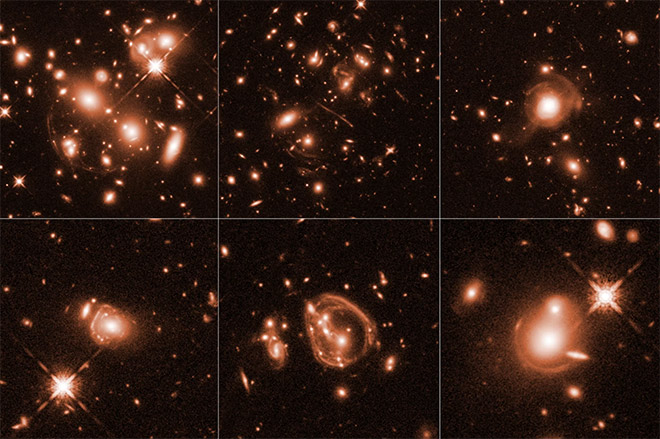 The Hubble Space Telescope tore down the next space jackpot – it got a series of images of ultra-bright galaxies that are constantly exploding with new stars.

The galaxies captured in these pictures shine like diamonds. They include a multitude of stars, each 10,000 times brighter than the Milky Way in the infrared range, or 10 trillion to 100 trillion times brighter than the Sun. In these galaxies, every year 10,000 new stars are born, according to NASA. For comparison: in the Milky Way less than 10 stars are formed per year.

In the photographs you can also notice strange shapes – rings and arches of light. This is a cosmic phenomenon called a gravitational lens. The galaxy in the foreground acts as a lens, distorting and amplifying the light of a farther galaxy.

In this case, the lens strengthened the light of very distant galaxies, giving scientists the opportunity to study them in the smallest detail.

“These ultra-bright, massive, star-forming galaxies are very rare,” says James Lowenthal, lead researcher. – Gravitational lens increases them so that you can see even the smallest details. We can see elements with a diameter of 100 light-years or less. We want to understand what energizes these monsters, and the gravitational lens allows us to study them to the smallest detail. ”

The birth and death of so many stars produce a lot of gas and dust, which obscures galaxies in many wavelengths of light, including visible ones. But infrared light can penetrate through these layers.

The fierce star formation in these galaxies coincides with the “star birth boom in the universe 8-11.5 billion years ago,” according to NASA.

To discover the secrets that these galaxies can contain, scientists need to know whether the strange elements that are visible on Hubble images – light curves and arches – are artificial, generated lens effects, or reflecting the real features of galaxies.