The “Einstein ring” was discovered 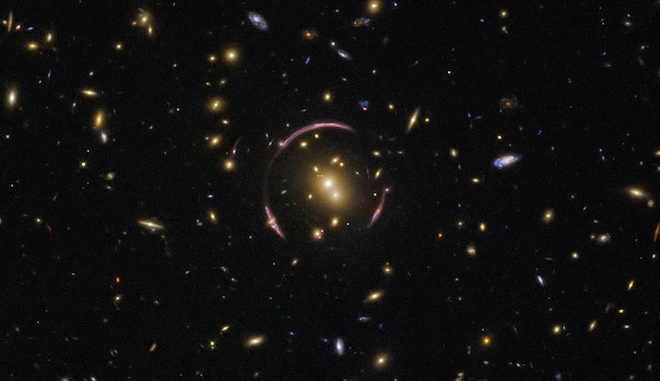 This picture is full of galaxies! A sharp eye can see exquisite elliptical and spiral galaxies, shown from different angles: in the lateral projection (where the plane of the galaxy is visible) and frontal (where spirals and space between them are visible).

This galactic cluster with the charming name SDSS J0146-0929 is a large union of hundreds of galaxies, which are held by a huge force of gravity. The mass of this galactic cluster is large enough to curl the space around it, so unusual arcs are created that practically center the cluster.

These stunning arcs are examples of a cosmic phenomenon known as the “Einstein ring”. Such a ring is created because the light from distant objects, for example galaxies, passes by extremely large masses, such as this galactic cluster. In this image, the light from the galaxy in the background is refracted and curved around a massive cluster in its path, and therefore the trajectories of the light move deviate. Thus, it seems that the galaxy is located in several places at once.