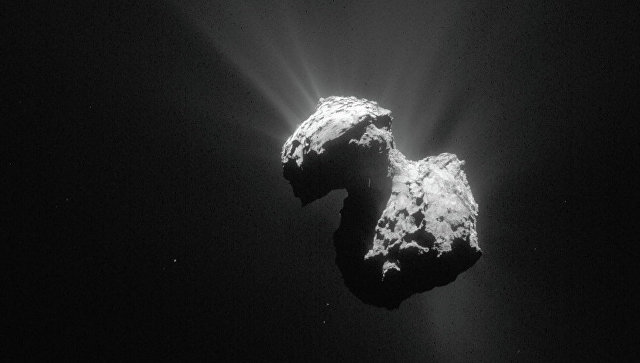 A large amount of organic matter in the comet Churyumov-Gerasimenko indicates that virtually all the “bricks” of life that they contain must have been formed before the birth of the solar system and beyond, the article published in the journal MNRAS says.

“We assume that the complex organic molecules that were found by Rosetta in the dust of Comet Churyumov-Gerasimenko were formed in the interstellar medium, inside the structures that our colleagues call” diffuse bands. “These molecules survived the turbulent history of the formation of the solar system, that the comets were formed very gradually and calmly, “writes Jean-Loup Bertaux of the University of Versailles (France).

According to modern ideas, the Earth and other planets of the Solar system formed in the first few hundred million years of its life inside the gas-dust nebula surrounding the newborn Sun. At the beginning of its life, the Earth was a hot ball, on the surface of which simply could not exist volatile elements and substances, including water, carbon and nitrogen compounds, as well as organic “bricks of life.”

The question arises, why then all these substances are found on the surface of the Earth and in the earth’s crust in great abundance. In this regard, scientists have several theories, and, for example, the presence of water on Earth is due to the fact that it could “bring” to our planet asteroids and comets that bombarded the surface of the Earth about 3.8 billion years ago.

Berto and his colleague Rosine Lallement of the Paris Observatory (France) tried to understand where the organics on Earth came from, studying the data collected by the Rosetta probe during its work in the orbit of Comet Churyumov-Gerasimenko.

One of the distinguishing features of this comet, as measured by the Rosetta itself and its drop-down module, Phil, was that its bowels contained an unusually large amount of organic matter-approximately 40% of its mass fell to dust and various “bricks of life.” This discovery was a big surprise for scientists, as they expected that organic would not have had time to accumulate in the primary matter of the solar system before the “germs” of comets were formed.

This fact, as well as some peculiarities in the chemical composition of Comet Churyumov-Gerasimenko, led Berto and Lalleman to the idea that all the “bricks of life” can be peculiar cosmic “aliens” – they could appear in the interstellar environment long before the birth of the Sun and fall into the “germ “The solar system is much later.

The source of this organic, most likely, are the so-called “diffuse bands” – relatively dense and very cold gas accumulations in the interstellar medium in which the organic material is formed under the action of cosmic rays and ultraviolet glow of distant stars. These bands were discovered more than 20 years ago, and since then scientists have found in them a lot of complex organic molecules, including the first “cosmic” fullerenes, nanoscales of 60 carbon atoms.

This theory can be verified only if a sample of the matter of comets is brought to Earth and scientists can calculate the proportions of hydrogen isotopes and other elements whose concentrations are very different for the solar system and the interstellar medium. As scientists hope, in the near future NASA, ESA and other space agencies will create the successor of “Rosetta”, which will solve this problem.