The exoplanet closest to Earth can be “densely populated” 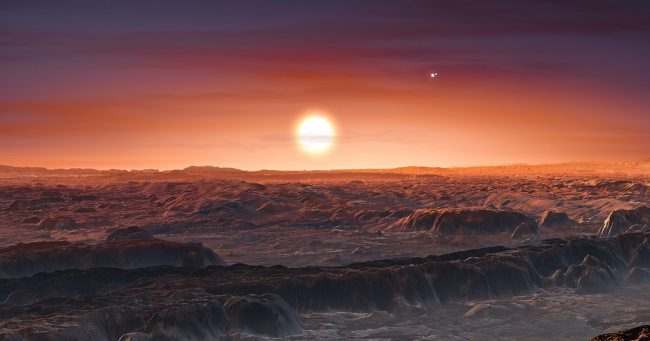 A small jump into space, away from the Earth – and you will find yourself on an earth-type planet in the orbit of the star of Proxima Centauri, closest to the Sun. Since the discovery of this exoplanet – the Centaurus Proxima b – in 2016, people all can not understand whether this planet can sustain life.

Now, using computer models similar to those used to study climate change on Earth, scientists have found that in a wide range of conditions, Proxima Centaurus can maintain huge areas of liquid water on its surface, potentially increasing the prospects for maintaining living organisms.
Is there a life on Centaurus’s Proxima?
“The main conclusion of our models is that this planet can be suitable for life with a high degree of probability,” says Anthony Del Genio, a planetologist at the Goddard Institute for Space Research at NASA. Del Genio is also the lead author of the work describing the new study, which appeared on September 5 in the journal Astrobiology.

Proxima Centauri is a small, cold star of the red dwarf type, located just 4.2 light years from the Sun. Despite the proximity of the star, scientists still know very little about the planet-companion Proxima Centauri, although its mass is about 1.3 terrestrial and it completes the orbit in 11 days. Therefore, Del Genio and his colleagues had to make assumptions that the exoplanet of Proxima Centaurus b represents itself, more specifically, its atmosphere and the ocean.

Proxima Centauri b rotates in orbit in a potentially habitable zone, that is, at the right distance to receive suitable stellar light and that the water on the surface of the planet does not evaporate, but does not freeze. However, in this case, this zone is “too close to the star”. Therefore, the planet is, most likely, tidal blocked by gravitational forces. Proxima Centauri b is always facing its parent star, like the Moon – to the Earth.

New models have shown that there is a living, circulating ocean on the planet that effectively transfers heat from one side of the exoplanet to the other. According to scientists, the movement of the atmosphere and the ocean is combined, so that “although the night side never sees the light of stars, there is always a strip of liquid water that remains in the equatorial region.” And the more part of the planet with liquid water, the higher the probability that, if there is life, we will prove its existence with future telescopes.