“The eyes of Saturn” in the new photo 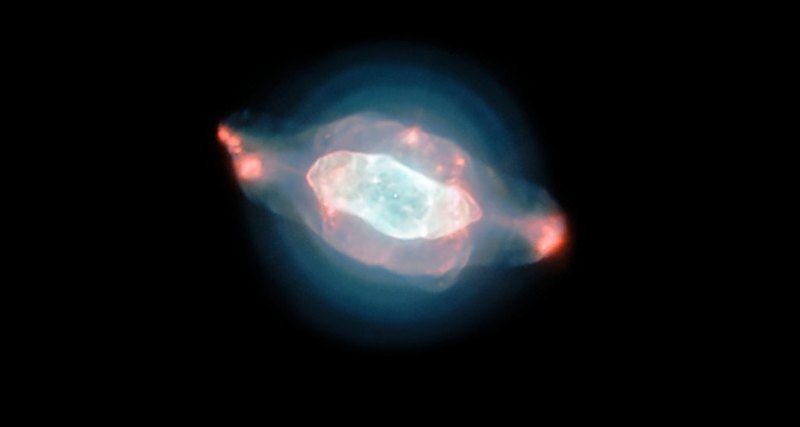 The VLT telescope received new detailed photographs of the unusual nebula NGC 7009, similar in shape to Saturn or a giant cosmic eye, looking at the world through a lens of the monocle, reports the site of the European Southern Observatory.

Planetary nebulae are huge clouds of red-hot gas that stretch for several light years. They represent the remains of the dumped shells of small stars, similar to the Sun, almost exhausting their hydrogen reserves and turned into red giants. This gas is constantly “warmed up” by the ultraviolet radiation of the dying star, due to which it starts to glow, which generates a beautiful and bright nebula. Their form depends on complex processes within the interior of the luminary, and scientists therefore actively study such nebulae in the hope of revealing the secrets of the death of stars.

Jeremy Walsh of the European Southern Observatory in Chile and his colleagues observed one of the most unusual planetary nebulae, the object of NGC 7009 in the constellation of Aquarius. This nebula is one of the first objects of its kind in the history of astronomy – it was discovered in 1782 by William Herschel himself, the author of the term “planetary nebula”, and it is removed from us by about five thousand light years.

Walsh and his colleagues conducted an unusual experiment – they used a MUSE spectrograph mounted on a VLT telescope to monitor the flow of gas and dust particles inside NGC 7009. Such observations, scientists hope, will help us understand how this nebula acquired its an unusual form, and will reveal the secret of her birth.

A preliminary analysis of the data obtained by Walsh and his colleagues shows that the “eye of Saturn” has a complex layered structure, and the dust and gas in it are distributed extremely heterogeneously. For example, dust is almost completely absent on the boundary between the interior of the nebula, the bright blue “pupil” NGC 7009, and its outer part, painted in red light.

The reason for this, according to the researchers, is that the shock wave generated during one of the last discharges of the outer shells of the star, grinds the dust grains or evaporates them, making them invisible to telescopes. This process, according to astronomers, can play an important role in filling the Galaxy with future “building materials” for planets, the main producer of which are nebulae like NGC 7009.