The far galaxy gives rise to stars with a huge speed 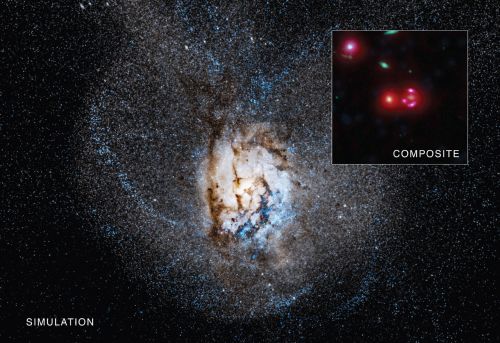 Astronomers through X-ray observatory of NASA of Chandr and other telescopes showed that one recently opened galaxy endures an improbable boom of star formation. This galaxy is at distance about 12,7 billion light years from Earth and is watched in a critical phase of evolution of galaxies, later about one billion years after the Big Bang.

After astronomers for the first time opened this galaxy known as SPT 0346-52, by means of the South Pole Telescope (SPT) telescope, it was watched several times by means of space telescopes and other terrestrial telescopes. Major versions of observed high activity of a galaxy in the Infrared range astronomers called star formation “boom”, and also the version about the active central supermassive black hole in this galaxy.

In a new research astronomers led by Jingzhe Ma from Florida State University in Geynsville, the USA, watching the SPT 0346-52 system by means of the X-ray space telescope of NASA of Chandra and the radio telescope Australia Telescope Compact Array of the State combining scientific and application-oriented a research ̆ Australia. Absence of X-ray and radio waves allowed researchers to exclude from reviewing the version with the central black hole and to make a choice in favor of a hypothesis of rapid star formation in this galaxy.

In a galaxy of SPT0346-52 of a star are created with a speed about 4500 masses of the Sun a year that is one of the biggest speeds of star formation among galaxies known to science.