The fastest object in the Galaxy was discovered 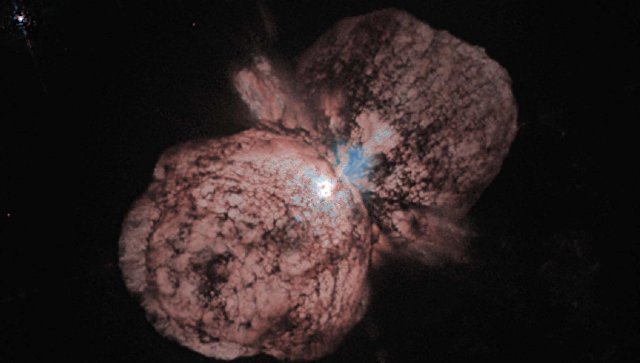 This Kiel, the largest and brightest star in the Galaxy, two centuries ago threw out very hot bundles of matter, dispersed to a fantastic speed of 20,000 kilometers per second, or 6% of the speed of light.

“Similar speeds are typical for supernova explosions, when an explosion completely destroys a star, in this case it did not happen, and there must be some process that pumped huge amounts of energy into the star in a very short time,” says Nathan Smith ) from the University of Arizona in Tucson (USA).

This Kiel is known for its unusual history. For the first time this luminary was noted on the sky map by the English astronomer Edmund Halley in 1677. During the 18th century and the beginning of the 19th century, the brightness of this star periodically increased and decreased.

For example, in 1827, its brightness began to grow rapidly, reaching a maximum in April 1843. At that moment, it eclipsed all the other stars in the sky, except for Sirius, located about a thousand times closer to Earth than This Kiel, remote from us at 7800 light years.

Observations of this star in the current century and in the 20th century have shown that it is an extremely exotic double system consisting of the largest star of the Galaxy with a mass of 120-150 Suns and its “small” satellite, whose weight is “only” 30-80 times higher than our luminary.

The pressure of light inside the interior of a larger luminous body is so great that outbursts of activity inside Eta Kiel literally “tear” the outer covers of the star, throwing them into open space. According to current estimates of scientists, a larger “half” of the system has already lost about 30 solar masses during such outbreaks, traces of which can now be seen in the form of a beautiful Homunculus nebula surrounding this Kiel.

Smith and his colleagues uncovered another unusual feature of this record-high and bright luminary, using, as the astronomers themselves say, a kind of “time machine” – a light echo of the famous “Great Flare” of 1843.

It is a special astronomical phenomenon, similar in its essence to the usual sound echo. In some cases, the rays of light that have arisen as a result of a powerful flash of a new or supernova flare up to some object and are reflected from it in the opposite direction. As a result, the echoes from the flare come to the observer much later than the event itself.

Six years ago, Armin Rest, Smith’s colleague, discovered a similar light “echo”, watching This Kiel with the help of Hubble and a number of other telescopes. This gave the scientists an opportunity to study in detail how this outbreak was born and to what consequences it led.

After studying the spectrum of this echo, scientists were able to measure the speed with which Eta Kiel’s emissions moved toward open space. It was a record high – about 15-20 thousand kilometers per second. This discovery posed a new mystery to the scientists – what could have produced such a powerful outbreak and did not destroy the star?

According to Smith and his colleagues, until 1843, in the Eta Kiel system, there were not two but three big stars, two of which collided and merged into a single whole in the middle of the 19th century. This led to the birth of the largest star of the Milky Way and the release of a huge amount of matter into space, dispersed to near-light speeds. Its mass, according to modern estimates, exceeds the solar one by about 10 times, which makes it one of the heaviest and fastest objects in our Galaxy.

All this, according to Rest, Smith and their like-minded people, says that this Kiel will turn into a supernova somewhat faster than astronomers now believe. This will not happen in the next 500 thousand years, but much earlier, the authors conclude.