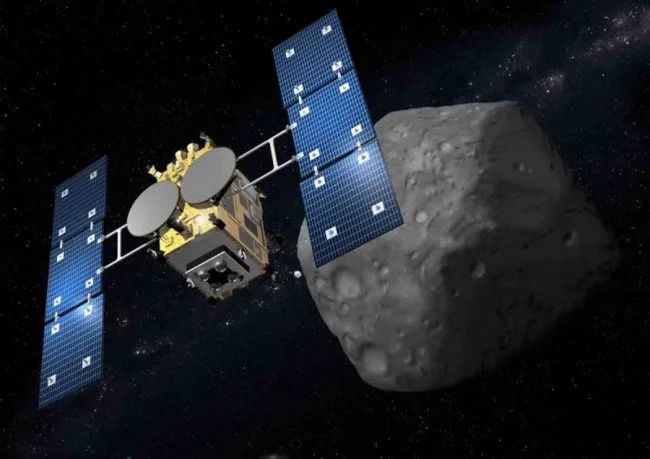 The discovered feature of the asteroid Ryugu surface casts doubt on the success of the mission of the Japanese space probe Hayabusa-2, the main purpose of which is to collect samples of its soil. We have previously reported that two Japanese rovers landed successfully on the surface of the asteroid, as well as a German landing module. And while the whole world was celebrating receiving the first photos of Ryugu’s surface, Japanese scientists were shocked by what they saw in these pictures.

Masaki Fujimoto, one of the leaders of the Hayabusa-2 mission, as well as other members of the mission, shared the first results of work on the surface of the asteroid Ryugu at the DPS conference held in the American city of Knoxville.

“The first received photos of the asteroid literally plunged us into shock. We expected that these images will help us to speed up the preparation and the procedures for planting and subsequent soil acquisition. But it turned out quite the opposite. Having seen the data, we realized that we have big problems, which cannot be solved so simply, ”Fujimoto comments.

Recall that the space probe “Hayabusa-2” was launched in December 2014. Its main task is to collect soil samples from the surface of the Ryugu asteroid and send these samples back to Earth. It is planned to fire an explosive projectile onboard the Hayabusy-2 into the surface of the asteroid, and collect the particles of its surface that have risen as a result of the explosion into a container and drop it to Earth in a couple of years.

The initial preparation for the main part of the mission – the “shooting” of the asteroid – was to begin in October, but the Japanese JAXA space agency, as well as its partners participating in this mission, had to postpone these plans at least until early January.

“When studying something new and unknown, we tend to rely on past experience. In this case, this experience played a cruel joke with us – the asteroid Itokawa, which we studied in the framework of the Hayabusa-1 mission, turned out to be quite unlike Ryugu. But we don’t have a way out, and we’ll have to somehow solve all unforeseen problems, ”Fujimoto explains.

The first bell of an approaching problem was heard when the Hayabusa-2 probe came closer to an asteroid at the end of summer. The device took several pictures of its surface, on which scientists noted a large accumulation of cobblestones. The surface was literally littered with them.

“We are very wrong in the calculations. It is already difficult to say why we believed that the Ryugu surface would be covered with an even layer of regolith, like on Itokava. On the other hand, it is clear why this error occurred – all other comets and asteroids are also similar to Itokawa in this regard, ”the scientist continues.

Covered with cobblestones in height from several tens of centimeters to several meters, the surface of Ryugu made it difficult to choose a site for planting. No, the scientists are not going to plant the Hayabusa-2 probe directly onto the surface of the asteroid, but they want to bring it as close as possible to the surface in order to shoot at it and collect samples. Such a requirement is caused by the absence of a robotic arm at the probe, with which it was possible to collect the particles that rose after the explosion.

The main difficulty, as the scientists note, is precisely how to bring the device to the minimum distance from Ryuga, and then dropping the explosive projectile, to shoot at it with a kind of “bullet” at the moment of contact with the surface. After that, the device must gain height and make several turns around Ryugu, collecting dust and small stones thrown into the space above the surface of the asteroid, using a special trap. Scientists initially hoped to get a few tens of grams of regolith in this way, but at the moment, the prospects for this venture look vague.

Lucilla Le-Corr, one of the mission participants from the Planetological Institute in Tucson (USA), explains that such requirements for Hayabusy-2, as well as the peculiarity of the Ryugu surface, significantly complicated the choice of landing site for two Japanese rovers, . In the end, scientists finally chose three potential landing points (L07, L08 and M04) located at the equator of the asteroid, but even here, not everything turned out to be as simple as we would like.

Yes, each point has several potentially empty landing sites, each of which is 100 x 100 meters. But they also contain dozens of fairly large stones, which can lead to the failure of the mission during the bombardment of the surface and subsequent overflights of the probe around the asteroid for collecting samples.

“In fact, we will have only one attempt to obtain soil samples from the inner layers of the asteroid. On board the “Hayabusy-2” there is only one explosive and a 2.5-kilogram copper “bomb” attached to it, as well as a small number of tantalum bullets. If something goes wrong, we will not have other opportunities, ”adds Fujimoto.

The researchers note that it was originally planned to carry out a test soil collection in October of this year, and the bombing – in March-April next. But the revealed details about its surface made scientists postpone these plans to a later date.

The researchers explain their caution because they did not fully understand all the structural features of the asteroid, and did not understand why there is such a huge amount of stones on its surface. If this is not cleared up, the further thoughtless continuation of the mission can lead to its catastrophic failure. For example, when blasted in, a large number of stones could rise that could damage the probe.

“To date, we had several assumptions, but previously obtained data already hinted that the Ryugu is not a monolithic body, but a kind of“ hodgepodge ”of many large stones and other objects of natural space debris. An asteroid could appear as a result of the collision of two other objects, consisting of relatively loose and fragile matter, ”the scientists explain.

According to the assumptions of Le Corr, the surface dotted with cobblestones can be explained by the following analogy. If you take a string bag, fill it with small stones and large cobblestones, and then shake well, large stones will be on the surface, and small granules will accumulate at the bottom of the bag. If the assumption is true with respect to Ryugu, then this may mean that its surface is constantly being updated with new stones, which also needs to be taken into account during the sampling mission. At the moment, the team is checking this guess, comparing the photos of the asteroid and spectroscopic data with what the results of rendering of Ryugu computer models show.

But is it all as serious as scientists from the Japanese space agency imagine? According to Ralph Jaumann, Project Manager for the MASCOT of the German Space Agency (DLR), he suggests that the impact of the cobblestones on the Hayabus II probe may not be as catastrophic as it seems to his colleagues.

“During the landing on the asteroid, our module collided with one of these cobblestones and fell on its side. Fortunately, nothing terrible happened. We expected something like this to happen. Moreover, this collision helped us to make measurements that clarified the properties of the matter of the asteroid, ”- says the scientist.

Yaumann notes that the mission scientists were well aware of the kinetic energy MASCOT had during this collision. These data allowed them to calculate the density of the stone, based on his photographs obtained after the landing module had completed the next jump.

Scientists have found that the matter of the stone was very soft and porous. Therefore, the collision of the module with it rather caused damage to the cobblestone itself, and not to the module. The stone is deformed and partially collapsed. There is a big dent on its surface. German scientists believe that such a density of matter is characteristic of the entire asteroid.

For sure, the mission team plans to analyze this by analyzing over a hundred photos, as well as data collected by MASCOT and information that will be collected by one of the Japanese jumping rovers that continue to work on the surface of the asteroid. In addition, to minimize the risk of landing, the researchers believe, it will be possible due to the maximum accuracy of this process. And mission engineers are already working on this. For example, scientists want to reduce the size of the landing probes to a size of 20 meters. It is noted that the positioning accuracy to the present moment has already reached the mark of 10.8 meters, which should already be enough to accurately touch the surface. In addition, “Hayabusa-2” scattered special beacons on the Ryugu surface, which will help the device to calculate the correct position while descending in the M04 zone. Currently, it is considered the most secure for such an operation by JAXA.