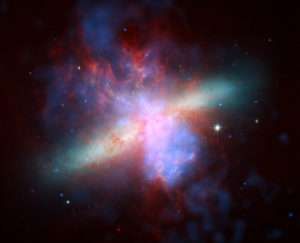 An international team of researchers showed in a new paper that a hot diffuse gas that fills the space between galaxies has the same iron concentration in all clusters of galaxies that were observed in the study with the Japanese satellite Suzaku. From this study, it can be seen that most of the iron was part of the intergalactic gas substance long before the first clusters of galaxies were formed.

A team of researchers led by Ondrej Urban, the main author of the work, who at the time of this analysis was a doctoral student at Stanford University, USA, studied hot gas piercing dozens of nearby clusters of galaxies and showed that the iron content in it is roughly the same for Of all the studied clusters and is about one-third of the content of iron in the matter of the Sun.

These results support the earlier assumptions that most of the iron in the universe was formed and distributed in outer space long before galaxy clusters appeared – more than 10 billion years ago. Iron and many other elements were “blown out” of galaxies with the energy of billions of supernovae, as well as emissions from growing supermassive black holes.

“If these elements were produced relatively recently, we would record different concentrations of iron in different clusters of galaxies. The fact that the iron distribution was so homogeneous indicates that it was formed in the very first galaxies of the universe, “Urban said.

These results were reported on Friday, June 30, at the annual meeting of the European Astronomical Society, held in Prague, Czech Republic.