The first houses on Mars will be from ice 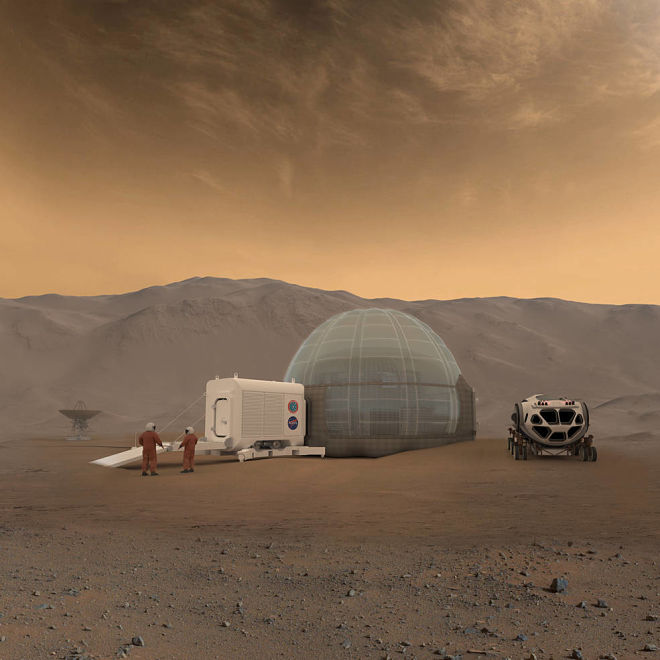 The surface of Mars differs in extreme temperature and is subject to the strong radiation from which the atmosphere is not capable to protect. When the first astronauts arrive to the Red planet, will spend several months there, but not days as the participants of a mission of Apollo flying to the Moon. Therefore, they need the safe shelter which is efficiently protecting from the severe Martian environment.

Scientists from the Research center NASA of Langley in Hampton (the State of Virginia, the USA) found an unexpected architectural concept for the Martian houses. By their calculations, the best structural material answering to all tasks is ice.

The Mars Ice Home project was chosen on a competitive basis by the Center of innovations at Management of space technologies of NASA (Space Technology Mission Directorate’s (STMD) Center Innovation).

“We devoted one day to detection of requirements, the purposes and restrictions, then estimated all pluses and minuses of our ideas and as a result agreed on this concept which provides the sensible engineering decision” — Kevin Kempton, the senior engineer of the Center Langley and the leading author of the project told.

The Martian ice house represents the larger inflatable structure surrounded with an envelope from water ice. Such house rather mild thanks to what it can be delivered to the planet and will be developed by means of prime robots before arrival of crew. It includes materials which can be extracted on Mars. Water in it can be transformed to rocket fuel for the take-off Mars Ascent Vehicle module, that is it both the dwelling, and capacity for fuel storage which can be replenished with the following crews.

Other important advantage is that hydrogen-rich water is excellent material for screening of galactic ultrarays. This high-energy radiation can directly pass through skin, damaging cages and even DNA that can lead to increase in risk of development of cancer with age or at worst cause a sharp radial illness. The design provides thickness of ice, necessary for protection, and at the same time it is rather transparent for a daylight passage that astronauts had no feeling that they are in a deep cave.

As scientists note, materials of which Ice Home consists are capable to sustain many years of use in severe conditions, including an ultra-violet radiation, radiation of the charged particles, perhaps, a quantity of atomic oxygen, perchlorates, and also dust storms, let and not so potent, as in the movie “Martian”.

Except identification of potential materials, the amount of water which can be taken from Mars was the major limiting factor for team. According to the experts, the resources developing systems for extraction on Mars, the speed of filling of the habitat — one cubic meter a day. Thus the structure of Ice Home can be filled with water in 400 days. If it turns out to increase withdrawal rate of water, the design can be expanded.

Padding design reasons include a lot of the free working space that the crew took place for an upkeep of a robotic inventory indoors without space suit. For management of temperature in Ice Home the layer of a carbon dioxide as isolation between living space and a heavy armor coat of ice will be used. As well as water, a carbon dioxide it is accessible on Mars.
“After several months of a space travel when astronauts for the first time arrive to Mars, will be more narrow than them there to wait for the ready house. It will be great day” — Kempton told.