The first moon outside the solar system was discovered 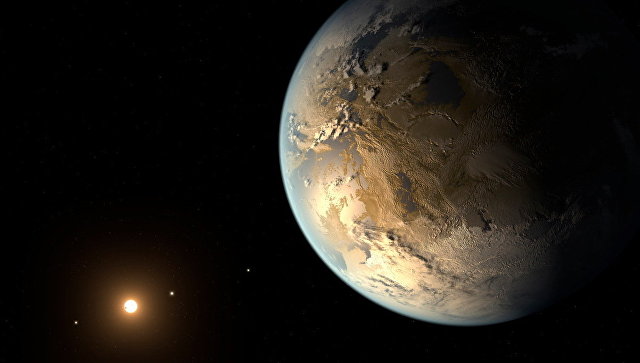 Famous astronomers David Kipping and Alex Tychy announced the possible discovery of the first “exoluna” – a planet revolving around another planet outside the solar system.

Light of the distant moons

After the launch of the Kepler orbital telescope, scientists discovered almost four thousand planets outside the solar system, several dozen of which are potential “counterparts” of the Earth or are in the so-called “zone of life.” Their discovery prompted planetologists and astrobiologists to begin developing methods that would allow them to assess their suitability for life or to try to find its traces in their atmosphere.

Life, as Kipping and Tichy write, can exist not only on the surface of the full-fledged “twins” of the Earth, but also on the moons of giant planets within the “zone of life” and located within the powerful magnetic shield of their “big brother”, protecting them from the solar Wind and cosmic particles.

In the past, scientists already found exoplanets of very small dimensions, similar in size and mass to Mars, but they could not find any full moon because of their extremely small size. Analogues of the Earth’s Moon or Jupiter’s satellites, as the planetologists note, will simply be invisible to Kepler and other telescopes, watching how the planets and other objects pass through the disk of stars, muffling their light.

Tichy and Kipping came up with an ingenious way to increase the sensitivity of “Kepler” and make it suitable for the search for similar “exolans.” They pointed out that the quality of the picture can be improved if you superimpose a lot of photos of how the planet passes through the disk of the star, at each other.

Guided by this idea, planetologists collected hundreds of photos of some 280 planets, for which Kepler followed almost continuously during the first stage of their work, superimposed them on each other and “subtracted” from them the mini eclipse that caused the passage of the planet along the disk of the star .

Accordingly, if the planet has a moon, then the brightness of the star will characteristically “sag” during its passage through the disk of the star. If it does not exist, then the star will always remain the same, and the moon should be absent from its planets.

Similar fluctuations in the luminosity of luminaries, as shown by the calculations of Tychy and Kipping, were present in the data on the luminescence of several dozen stars, one of which, Kepler-1625, is almost guaranteed to have a large exotoon the size of Io, one of the largest moons of Jupiter.

This moon, as scientists say, revolves around the planet Kepler-1625b, a reduced analog of Saturn, whose radius is about half that of Jupiter and 6 times greater than that of Earth. The giant planet makes one revolution around the star in about 287 days and is practically in the middle of the “zone of life”.

On the other hand, as Tichy adds, the latest measurements of the properties of the Kepler-1625 show that it can be much larger than previously thought. In this case, the Kepler-1625b will be similar to Jupiter, not to Saturn, and its moon will then be impossibly large – it will be comparable in mass and diameter to Neptune, not Jupiter’s satellites.

What it really is, Tichy and Kipping plan to check up very soon, in October this year, when the planet Kepler-1625b once again passes through the star’s disk, which astronomers will observe with the help of Hubble. These observations will help to understand what is the mysterious object of the Kepler-1625b, whether it is a moon and whether life at least in theory can exist on its surface.

In general, as noted by Tichy, the discovery of only one exoluna was a big disappointment for him – planetologists expected that they would be able to find many more objects from the planets discovered by Kepler. Apparently, the moon is extremely rare in planets close to the stars, which scientists also plan to verify in subsequent observations.