The first picture of Mars from Kubsat flying to him 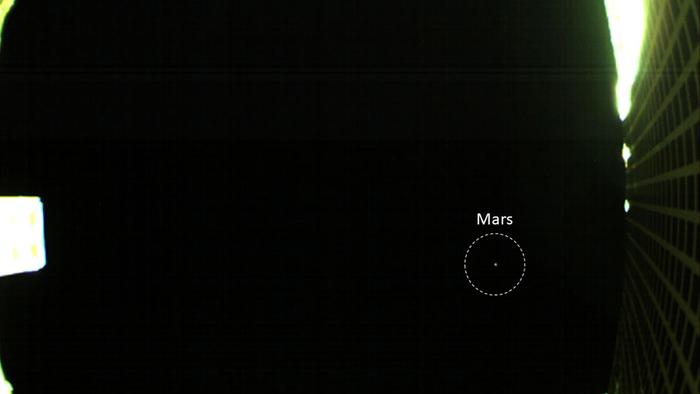 Together with the InSight mission, two Cubs of the MarCO mission fly to Mars. These are experimental devices on which the ability to operate such small satellites from other planets is being tested. One of the vehicles in the test of the exposure of the wide-angle camera took a picture of Mars, to which MarCO-A and MarCO-B will arrive by November 26th.

Small devices created in JPL NASA should confirm their capabilities at a distance of over 100 million km. Their task is to relay telemetry from an InSight probe, which is to land on Mars in November. The reduction will take place on the shadow side of the planet, so the device will need a repeater to transmit information. Then MarCO will fly into the asteroid belt and become part of it.

This photo was taken when the Kubsat was located at a distance of approximately 12.8 million km. In their movement on their way to Mars, the vehicles are moving along a trajectory that is catching up with the planet. Therefore, they still have to go about 80 million km, and more than 400 million km have already been passed. For the test, the MarCO-B cameras also had to be rotated in order to aim at the planet. The mission team is also pleased with the orientation system. In addition to Mars, parts of a high gain antenna have fallen on the image.

In the coming weeks we will be able to see new images of Mars in the approximation, as MarCO approaches.