The first planet with a “star” atmosphere was found 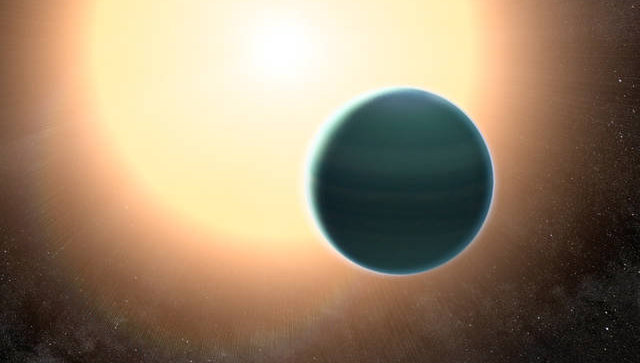 Telescopes “Hubble” and “Spitzer” have opened the first relatively small planet with the size of Neptune, whose atmosphere and subsoil actually consist entirely of pure helium and hydrogen – typical stellar “building materials,” the article published in the journal Science.

“This” hot neptune “is much smaller in size than the other planets whose atmosphere we were able to study in detail, and therefore this discovery is felt by us as a major breakthrough in understanding how planetary systems arise and how this process could go differently in the solar system “- said David Sing (David Sing) from the University of Exeter (UK).

Over the past ten years, astronomers have discovered thousands of planets outside the solar system, some of which are similar in size to Earth, and others to smaller or larger copies of Jupiter. Now, planetologists are actively studying their atmosphere to assess the possibility of existence of life and the disclosure of the history of formation.

Great progress in this direction was achieved in the study of “hot Jupiters” – the largest and most convenient for analysis of the planets outside the solar system. Their hot atmosphere turned out to be similar in composition to the gas shells of Jupiter and Saturn, mainly consisting of hydrogen, helium and hydrocarbons, and in their sky astronomers discovered exotic glass and lead clouds and rains from precious stones.

The chemical composition of smaller planets remains a mystery to scientists because of their size, interfering with the study of their spectrum, which stores information on the composition of air. Only one relatively small “super-earth”, the 55 Cnc b diamond planet in the constellation of Cancer, was studied last year, and its atmosphere proved to be unsuitable for sustaining life, as it consists of hydrogen, helium and poisonous hydrocyanic acid.

The planet is the “sun”

Singh and his colleagues took the first step toward studying the composition of the atmospheres of potential “super-earth” by measuring and studying the spectrum of the planet HAT-P-26b, recently discovered by a sun-like star in the constellation Virgo.
This planet, 430 light-years distant from the Earth, is a relatively small “hot neptune” – a gas giant similar in size to Uranus or Neptune. Similar objects are discovered almost as often as “hot Jupiters,” but the composition of their atmosphere has remained a mystery until now.

Observing passages of HAT-P-26b on the disk of the star with the help of optical instruments “Hubble” and “Spitzer”, scientists were able to accurately measure the spectrum of this planet and come to an amazing conclusion – it turned out that its atmosphere almost does not differ in composition from the matter of the Sun And other stars.

In other words, HAT-P-26b air is almost 100% pure hydrogen and helium, with small impurities of water, methane and carbon dioxide. This discovery was a big surprise for scientists, since the atmosphere of “our” Neptune and Uranus is much richer in other substances than the air masses of their distant “cousin”. For comparison, their entrails contain 100 times more heavy elements than the Sun, whereas their concentration in the atmosphere of HAT-P-26b exceeds solar only 4.5 times.

Such conclusions cast doubt on generally accepted theories on the formation of the solar system, linking the chemical composition of the giant planets with the point where they were formed.

Jupiter and Saturn, whose subsoil are similar in composition to the HAT-P-26b, were born in the “middle” part of the protoplanetary disk, where there was a lot of helium and hydrogen and few other forms of matter. In turn, Uranus and Saturn formed in the farther part of it, where fragments of comets and asteroids that were thrown out of the inner regions of the disk gradually accumulated: due to this, their bowels were believed to have been enriched with “heavy” elements.
The almost “solar” composition of the subsurface of HAT-P-26b caused planetologists to doubt this theory. The study of the chemical composition of other “hot neptune”, according to scientists, will help to find the final answer to this question.