The great red spot was a giant “hot water bottle” 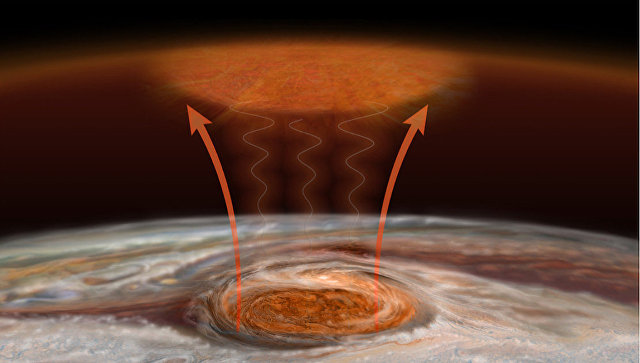 Unusually high temperature of the atmosphere of Jupiter can be explained by the fact that his great red spot, a giant hurricane in the southern hemisphere of the planet, plays the role of “warmer” to transport heat from the bowels of the giant in its outer layers, according to an article published in the journal Nature.

“The fact that energy can be transferred from the lower to the upper atmosphere of planets, we have demonstrated in computer models of their device, but the actual evidence in favor of this, we did not have. What on this blast of extremely high temperature, is unusually strong evidence that this transition process is actually happening, and that the heat transfer on a global scale possible,” said James O’donoghue, James O’donoghue) from Boston University (USA).

The great red spot, believed to be first discovered by the Italian astronomer Giovanni Cassini: his image is found in the drawings of the scientist from 1665. As scientists found out later, it represents a powerful hurricane, the cyclone, whose winds move at an incredibly high speed of about 430 kilometers per hour.

The brightest region of the Great red spot, the size of which is about three Earth diameters, and the average temperature — 160 degrees Celsius below zero, correspond to the relatively warm core of the hurricane, which is surrounded by a colder outer vortices. The study of the mysteries of this region will be one of the main goals of the Juno probe, which arrived at Jupiter in early July.

O’donoghue and his colleagues have uncovered one of the main mysteries of this hurricane and before the Juno, watching the air masses above the upper cloud layers on Jupiter with an infrared telescope IRTF in Hawaii.

This telescope has allowed scientists not only to measure the temperature of Jupiter the air in the hurricane, but at the height of 500-750 miles on it. These measurements unexpectedly gave planetary scientists to explain one of the main mysteries of the atmosphere of Jupiter.

The fact that the outer layers of his aerial shells implausible hot – they are heated to the same temperature as the thermosphere of the Earth (from zero to 2,5 thousand degrees Kelvin), despite the fact that Jupiter is five times farther from the Sun than our planet. Accordingly, it is the missing heat had somewhere to take that has generated controversy among scientists, which they call “the energy crisis of Jupiter”.

This gave them the idea that this hurricane is a giant heat pump that literally “pumps” heat from the depths of the gas giant, crazy heat power pressure and collapse of the remnants of radioactive substances in the upper atmosphere. Very heat moves to the surface of the planet in the form of acoustic waves, rising vertically to the surface due to the existence of this storm.

The establishment of such a system of “pumping” of heat, as scientists believe, suggests that similar processes may occur for planets outside the Solar system. This may explain some oddities in the behavior of “hot Jupiters”, which are often found at distant stars and to affect the habitability of earth-like worlds more, sign O’donoghue and his colleagues.