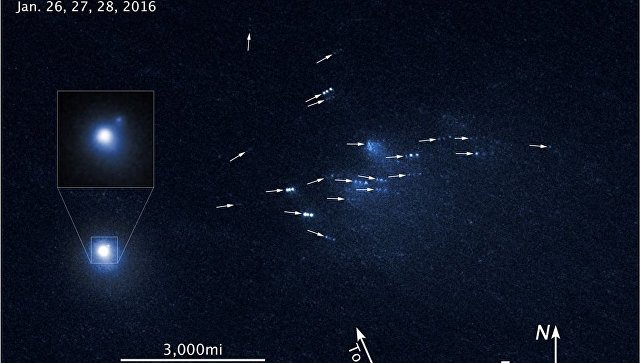 Orbital Observatory Hubble had a unique photo of comet 332P/ikeya-Murakami, broken into pieces right in front of scientists in 67 millions of miles from Earth.

We know that comets sometimes fall apart but we don’t know how and why this happens. The problem is that this process occurs so quickly and unexpectedly that we have usually no chance to get the data. Due to the extremely high resolution of the Hubble, we saw not only a small, very dim comet fragments, but were able to follow their lives a few days, ” says David Jewitt (David Jewitt) University of California Los Angeles (USA).

Jowitt and his colleagues made this discovery largely by accident, observing the various objects in the vicinity of Mars and the main asteroid belt in January 2016, with tools like Hubble.

By studying the images 332P ordinary comet/ikeya-Murakami, scientists noticed something unusual – instead of one large object they saw 25 points of light on images of Hubble, indicating that the comet is beginning to fall apart or throw large pieces of itself into the surrounding space.

After analyzing these pictures, the scientists came to the conclusion that the comet for some unknown reasons, started to spin rapidly, which, apparently, led to the disintegration of its nucleus and its fragmentation into parts, the tail of which stretches over a distance similar to the distance between Moscow and lake Baikal.

The collapse of comet, as scientists assume, occurred in October or November of this year, and most of the fragments 332P/ikeya-Murakami, according to the team Julitta, was ejected from the comet’s nucleus simultaneously, which speaks of a certain catastrophic event. On the other hand, there is the possibility that the comet is gradually unwound and the shards broke away from her one by one, which may explain the unusually great length of its tail.

The reason for this promotion and the collapse of the comet, as scientists admit is unclear. As I hope Jovit and his colleagues, further observation of 332P/ikeya-Murakami, which broke away while only 4% of the mass, and other comets will help solve the mystery of their spontaneous disintegration.