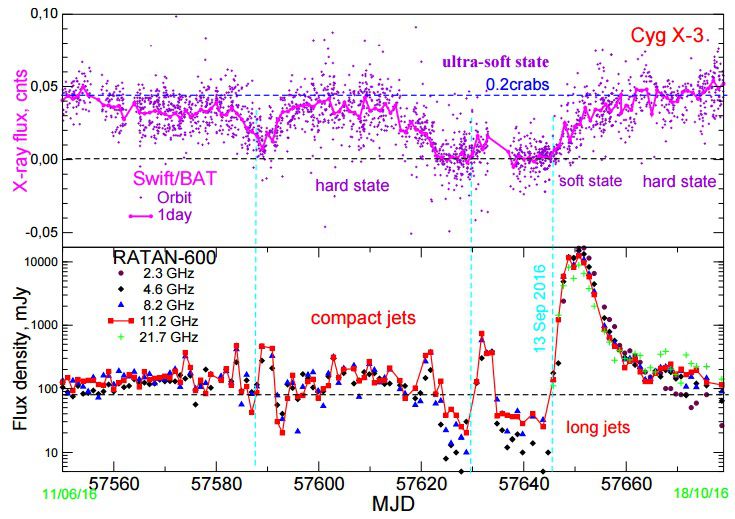 Classified as a microquasar, Lebed of X-3 represents the powerful x-ray source which is presumably representing the compact object which is a part of double system. It was initially open in the x-ray range in 1967, and IK – and radio – the ranges is observed in x-ray, gamma. This source is at distance about 23000 light years from us in the direction of the constellation Lebed and has the orbital period approximately at 4,8 o’clock.

This phase “hibernations” of a source was interrupted with the huge radio splash which took place in September, 2016 and predicted by team of astronomers under the leadership of Sergey Trushkin from the Special Astrophysical Observatory (SAO) located in the item Nizhny Novgorod Arkhyz, the Russian Federation. Researchers observed a source Lebed of X-3 by means of the telescope of the RATAN-600 radio telescope within the long-term multiwave campaign for observations of microquasars.

According to results of this new research the flash on a source Lebed of X-3 happened after about 5,5 years of calm. The flash of 2016 resulted from transition of a source to “supersoft” (hyper-soft) a x-ray condition, also as it was in case of the previous flash which took place in 2011.