The InSight probe will begin drilling on Mars on Monday 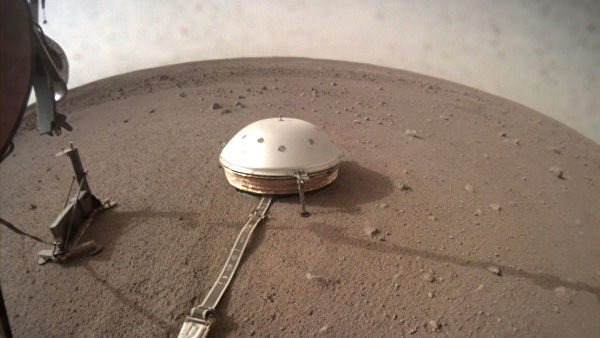 The robotic arm of the InSight landing platform successfully unhooked from the HP3 drilling rig and completed a test of its stability, which opens the way for the start of the first Martian “excavations”.

“According to our current plans, HP3 will receive a launch team on Monday and will start work on Tuesday, at about 10 am, Martian time. If everything goes well, we will be the first, apart from the Apollo astronauts, who managed to drill the surface of another planet to a greater depth, “- said Tilman Spohn, project manager for HP3.

The descent module InSight made a successful landing on the Elysian Plain at the equator of Mars at the beginning of December last year. He became the official heir to another NASA geologist probe, the Phoenix Lender, who landed on Mars in May 2008 to search for traces of life and water in its soil.

A seismograph is installed on board, as well as a geophysical thermometer, which will be installed in a five-meter well for measuring the temperature of the depths of Mars. One of the instruments of the probe will track the rotational oscillations of the planet with high accuracy, which will help determine the mass distribution in the planet’s interior and better understand its internal structure.

At the end of December, the probe successfully deployed solar panels, extended its arm and installed a seismometer in one of the flattest and safest points in its immediate vicinity. In early February, it was closed with a special “lid” and began to conduct full-fledged scientific observations.

More than a week ago, German scientists and their American colleagues began installing the second main tool of InSight, the HP3 drilling rig. This complex multistage procedure was completed only yesterday, when the robotic arm unhooked from the shell of this device and completed the cable test, with which it connects to the landing module.

Tomorrow Spon and his colleagues will send a special set of commands to InSight, which will release the Mole, the active part of HP3, from the bolts that held it in place during the flight, and begin preparations for drilling. Scientists will learn about the results of this procedure only on Sunday, after which they will decide to start drilling or cancel all operations.

As geologists hope, in the first days of work, HP3 will penetrate to a depth of about 70 centimeters, which we will learn on Wednesday or Thursday next week. After that, the drill will receive two days of rest, which scientists plan to spend on checking thermal sensors InSight and keeping the first observations of the temperature of the depths of Mars.

At the end of the week, drilling operations will be resumed – at first, HP3 will pass another 30 centimeters and will again stop for two days, and in the following “working days” it will go deeper by 50 centimeters until it reaches a depth of five meters. This will happen, as researchers expect, around the beginning of April.