The ISS created the coldest place in the universe 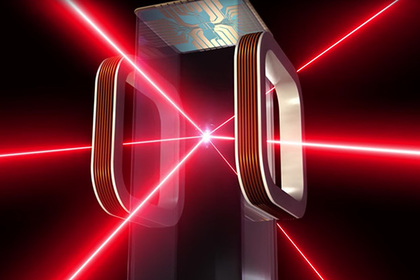 NASA scientists first created the Bose-Einstein condensate on board the International Space Station (ISS), cooling the rubidium atoms to a temperature equal to one ten-millionth part of the kelvin above absolute zero (one kelvin equals minus 272.15 degrees Celsius). This is about three kelvins lower than the average temperature of outer space. This is reported in a press release Jet Propulsion Laboratory.

At absolute zero, equal to minus 273.15 degrees Celsius (zero kelvin), the atoms of the substance must completely stop the movement. However, this is unattainable in practice because of zero-point vibrations-quantum fluctuations that occur when the system achieves a minimum energy state. Such an effect is observed in a Bose-Einstein condensate consisting of bosons-particles (or atoms) that can occupy the same quantum state. Since all particles are capable of reaching a minimum energy level, the entire condensate ceases to interact with the atoms of the surrounding substance. As a result, for example, the friction force disappears and superfluidity arises.

On Earth, the Bose-Einstein condensate exists for a fraction of a second, but on the space station, the lifetime of this form of matter has reached 5-10 seconds. In addition, scientists are able to reproduce the experiments for six hours a day.

It is expected that the phase of active research within the Cold Atom Laboratory project will begin in early September and last for three years. In the future, scientists plan to reach even lower temperatures, and also use potassium isotopes to create a Bose-Einstein condensate.