The ISS is having problems with an inflatable living module 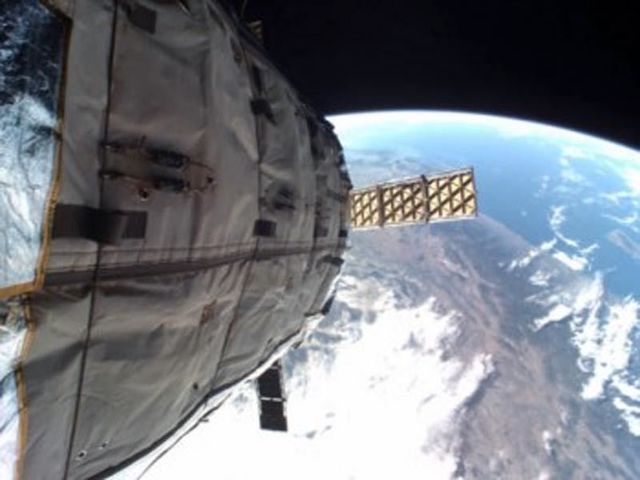 On the International space station (ISS) had to stop the deployment of American residential inflatable BEAM module, designed to live and work for future crews of the orbital complex. The representative of NASA in the Moscow mission control Center (MCC) reported that the module started to open up unevenly, so the astronauts are planning to blow it to its original condition.

The unfolding of the module began on Thursday morning, but the operation was suspended due to abnormal readings of pressure sensors”. The module failed to inflate, despite constant pressure

“The deployment went according to plan, with the result that further work is pending,” – said on the website NASA.

“Unlike traditional way of filling when the air is delivered directly into the object as if the inflation of the balloon, in the case of inflatable modules, air enters the cavity, located between the layers of material constituting the casing of the module. The initial plan was to use air from tanks inside the BEAM, and disclose the cavity, but the analysis showed that seeding can occur too quickly and render destructively high loads on the ISS, so the air it was decided to serve another way,” explained NASA.

Control panel with boost there signal failure, stating that no acknowledgment was cutting the tape that holds the module housing in the folded state.

This problem was solved astronaut Jeffrey Williams land, together with specialists who have given permission for the cutting of the ribbon. However, the engineers decided to delay the procedure for later deployment. “It is not excluded the risk of immediate deployment of the module due to the potentially high pressure that could adversely affect its structure, which can be deformed”, – explained the source.

At the moment, with the module do nothing. “The astronauts are busy with their ordinary work on the ISS. From the module while they were distracted, while experts decide what to do with it”, – said the representative of NASA.

“The next steps – they want to blow away what is already pumped, this option is considered. And then, upon receipt of the information, a decision will be made that it (module) to do. Obviously, there are some deviations, but it is unclear what”, he said.

Module 1413 pounds weight produced by a private American company Bigelow Aerospace, involved in space tourism, in the framework of the contract for 17.8 million dollars, signed with NASA.

BEAM was delivered to the ISS on 10 April aboard the cargo ship Dragon, along with three tons of food, water and materials for scientific experiments. The diameter of the module after opening should be about three meters and a length of about four meters. “Habitable volume” is equal to 16 cubic yards.

The astronauts planned to test how well the design protects from solar radiation, space debris and extreme temperatures in space, and to explore the prospects for further use of inflatable modules.