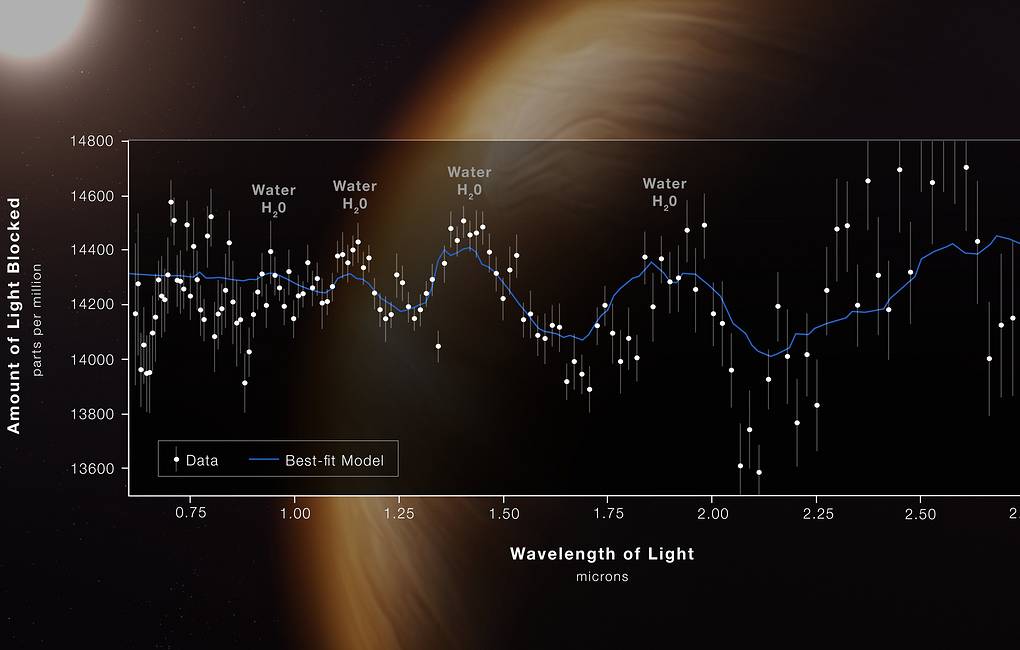 The James Webb Orbital Telescope has obtained the first spectral data on the properties of the atmosphere of the exoplanet WASP-96b, in the air of which the NASA spacecraft detected traces of water vapor. This was announced on Tuesday by participants in an online press conference at the NASA Goddard Space Flight Center.

“The launch of James Webb allowed us to study the infrared part of the atmosphere of a very distant exoplanet with such high accuracy for the first time. The traces of the presence of water in the air of WASP-96b discovered by us for the first time indicated that clouds and fog accumulations are present in the atmosphere of this world,” – said Nicole Colon, a researcher at the NASA Goddard Space Flight Center (USA).

Exoplanet WASP-96b is a large world that orbits a very short distance from the sun-like star WASP-96. It is located in the constellation Phoenix at a distance of 1.15 thousand light years from Earth. This world is one of the “hot Jupiters” – gas giants, whose atmosphere is heated to several hundred or thousands of degrees Kelvin.

As the press conference participants noted, the first spectral data obtained by James Webb while studying the atmosphere of WASP-96b indicated the presence of water vapor in the upper atmosphere of this world, and also indicated the presence of clouds and fog accumulations in its air envelope. The latter came as a surprise to scientists, as astronomers previously believed that there were no clouds in WASP-96b’s atmosphere.

Telescope “James Webb” (James Webb Space Telescope, JWST) was launched into Earth’s orbit at the end of December last year. It is intended to replace the Hubble orbital observatory, which has been operating in orbit for more than three decades. Its “successor” is equipped with a compound mirror with a diameter of 6.5 m and a modern set of scientific instruments that will allow “James Webb” to get the first detailed photographs of exoplanets.

Initially, NASA management planned to launch a new device in 2014, but cost overruns and a number of technical difficulties forced several times to postpone its launch into space. According to the current plans of the James Webb science team, the first scientific observations will begin this summer, and the mission will operate in orbit for at least five years.