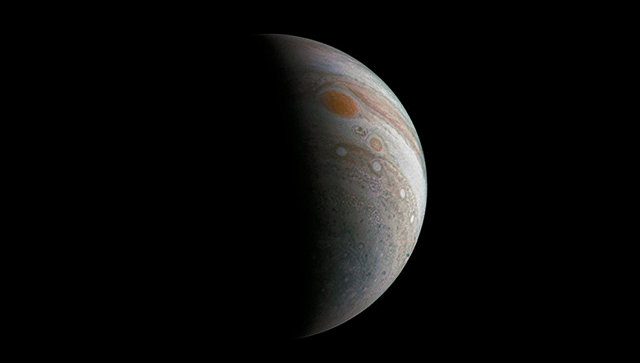 The Juno probe transmitted to Earth a new batch of photographs obtained during the third rendezvous with the giant planets, one of which you can see the Great red spot – a giant perpetual hurricane on the equator of Jupiter, according to NASA.

The Juno probe flying to Jupiter five years from August 2011, in early July, closer to the giant planets and came to a stable orbit around it. The first two months after convergence, the probe spent on the reduction of the orbit and the scientific instruments and the first scientific data were obtained only at the end of August.

Verification of all scientific instruments Juno and the transition to new, more convenient to conduct observations, the orbit was to be held in mid-October, however, just before beginning this maneuver, NASA fixed a problem with the engine, which forced engineers to postpone its mission for the next conjunction with Jupiter.

This series of failures has not ended, and during the rendezvous with Jupiter, the probe suddenly went into safe mode, thus eliminating extensive and hastily compiled a programme of scientific observations, which Juno had planned instead of a failed orbital change. About a week after that, NASA announced that the probe was able to normal operation, but no plans for its further fate has not been announced.

In early December, Juno was the third time that close to Jupiter, this time not having special adventures. During this flyby of the giant planet included almost all the tools of the probe, and Juno for the first time has collected comprehensive data on the depths of Jupiter, and took photos of the planet from close range.

In one of the photos that NASA posted on its website, you can see the Great red spot of Jupiter is an enormous hurricane-cyclone whose winds are moving with extremely high speed of about 430 kilometers per hour. These photos were taken on December 11 at the point of closest approach with Jupiter, when the probe was in 460 thousand kilometers from the upper cloud layers of the giant planet. In addition to great spots for photography can be seen as pearls of Jupiter and a number of other hurricanes.

The dimensions of this spot are measured not in kilometers, and the diameter of the Earth – it is about three times wider than our planet, and the temperature difference in the warm and cold points exceeds a few hundred degrees. Today astronomers believe, great spot works like a heating pad, pumping heat inside of Jupiter in it is impossible the hot atmosphere. The subsequent rapprochement with the planet, scheduled for 2 February, will allow NASA to continue to explore the mysteries of this giant structure.