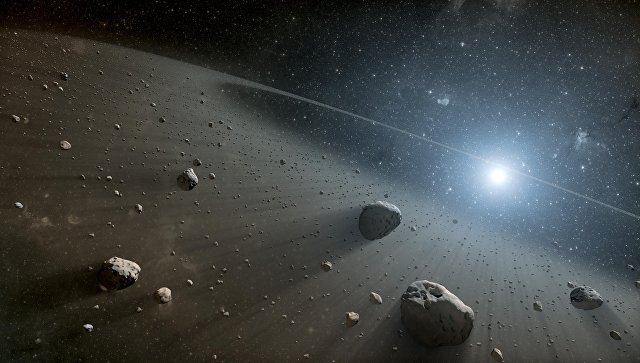 The Kepler telescope got pictures of the main asteroid belt of the Solar system in the framework of the mission K2 and studied hundreds of large enough small celestial bodies whose pictures scientists have not previously received.

We followed the trajectories of all known asteroids in this region of space, but most of them were too dull in order to be able to see Kepler. Bright globular cluster M35, acting as background for our observations did not help to see them. And despite all this we managed to follow four dozens of asteroids and measure their speed, something that no one, really did not expect, says Robert Szabo (Szabo Robert) from the Observatory of Konkoly (Hungary).

The Kepler telescope specifically designed to search for exoplanets, was launched in may 2009. The camera followed the stars in a small region of the sky near the constellations Cygnus and searched for the planet, locking in weak fluctuations in the brightness of these stars with the passage of the planets through the disk of the star. In may 2013, the telescope is out of order, but experts have found a way to continue his work in the so-called mission K2.

Before the start of the K2 Kepler looked at the Universe in fact perpendicular to the Ecliptic – the imaginary plane on which all planets and most comets and asteroids in the Solar system. After the resurrection, the telescope began to periodically look inside the main asteroid belt between the orbits of Mars and Jupiter, as well as in other areas of the system, where asteroids and comets.

This advantage of the Hungarian astronomers under the leadership of szabó, analyzed snapshots of the main asteroid belt, accidentally obtained by Kepler during the search for exoplanets, and they discovered hundreds of asteroids, living near the Land or included in the number of so-called Trojan objects – asteroids, following, or in front of Jupiter in its orbit.

Monitoring with Kepler, which in some cases lasted almost a month, helped scientists to clarify the properties and measure the rate of rotation of many asteroids from the main belt and their Trojan counterparts. These photographs helped astronomers make important discoveries concerning the origin of these objects, is able to leave its orbit due to gravitational perturbations and become a threat to life on Earth.

As it turned out, all Trojan asteroids rotate very slowly, which indicates that they are migrants from more than the cold and distant reaches of our Solar system, and not heavenly bodies that have always lived near Mars, Earth and Jupiter. Accordingly, there should be some mechanism that constantly transportorul these celestial bodies in the vicinity of Jupiter where they become Trojans.

Interestingly, about a quarter of Trojan asteroids travel in an orbit of Jupiter are not alone, but in the company of the satellite, around which they rotate slowly. This researchers have long suspected since the discovery of a satellite of the asteroid Patroclus in 2001, but confirmation of this idea was received just now, with the Kepler.