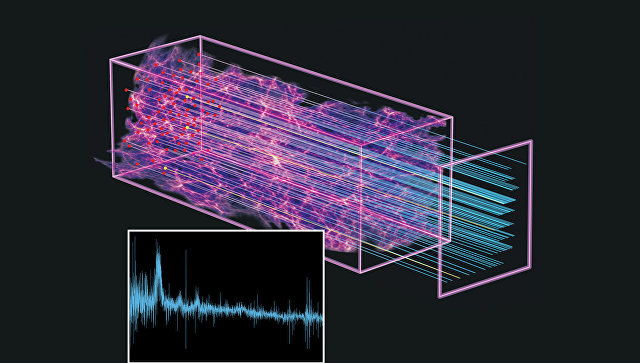 The map of the distribution of supermassive black holes in the universe has helped astronomers prove that dark energy exists and that it causes space to expand faster, says an article published in the journal MNRAS.

“Now we understand how gravity works, but some questions about the design of the universe, such as the essence of dark energy, remain a mystery to us.” We have long wanted to understand what it is and projects like eBOSS help us gradually replenish our knowledge of the nature Universe, “said William Percival of Portsmouth University, UK.

The BOSS project is being carried out as part of the “large” Sloan Digital Sky Survey (SDSS) since mid-2008. With its help, scientists are trying to find so-called baryonic acoustic oscillations (BAO) – “echoes” of the birth of the universe in the form of acoustic waves, because of the motion of which there were inhomogeneities in the distribution of matter that gave rise to modern galaxies and groups of galaxies.

To do this, astronomers study the spectrum of quasars, the most ancient, bright and large black holes in the centers of distant galaxies, watching how their light interacted with gas clouds in voids between the threads of the “web of the Universe” on the way to Earth. Comparing the differences in how the light changed during these journeys from relatively distant and near galaxies, scientists track how fast the universe expanded, and check whether the process was the same in different parts of the universe.

The first results of the BOSS were published four years ago. Tracing 60 thousand black holes, the farthest of which were located at a distance of 11.5 billion light-years from the Earth, scientists did not find any discrepancies between modern theoretical concepts of the properties of dark energy and what they observed in the spectra of these quasars.

On the other hand, such discrepancies were recently found in the results of observations of relatively supernovae and “pairs” of distant quasars. It turned out that today the universe expands unexpectedly quickly – much faster than theory and calculations say on the basis of observations of the microwave “echo” of the Big Bang using the “Plank” telescope.

This led many physicists to doubt the existence of dark energy and the expansion of the universe with acceleration. Recently, supporters and opponents of the “inflation theory” have entered into an open dispute on the pages of scientific journals and popular science publications.

For example, opponents of the expansion of the universe called this idea unscientific, and its supporters accuse opponents of methodological miscalculations. At once 33 leading cosmologists of the world, including the Russian Andrei Linde, published last week a letter responding to criticism of skeptics.

Percival and his colleagues, including astrophysicists from the Institute for Nuclear Research of the Russian Academy of Sciences in Moscow, added fuel to the fire by publishing new data from the BOSS survey, which now includes more than 176,000 galaxies and their black holes distant 13 million light-years from Of the Earth. In fact, they managed to build a three-dimensional map of galaxies and matter between them in a cube measuring 12 x 12 x 12 billion light years.

The new survey data, as astrophysicists tell us, generally correspond to the classical model of the Universe device, which includes dark matter and dark energy. The speed of expansion of the universe in it, on the other hand, is closer to the values ​​of “Planck” than to the data on supernovae, which makes the discrepancies even more incomprehensible and interesting.

The further increase in the number of quasars and the discovery of more distant objects, as the participants hope, will help verify the results of Planck and understand which of the two speeds of expansion of the universe is correct and how much dark energy is involved in this process.