The largest companion of the Milky Way was caught in “cannibalism” 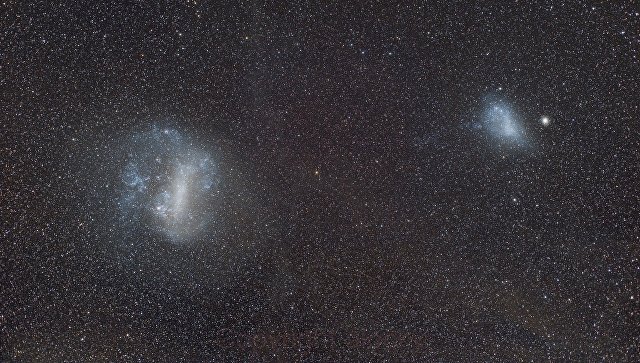 Our Galaxy was surrounded not by two but by three Magellanic Clouds, one of which was torn to pieces and “eaten” by the Great Magellanic Cloud about three billion years ago. This conclusion was reached by scientists who published an article in the journal MNRAS.

“We thought for a long time that some of the stars inside the Great Magellanic Cloud are turning into the” wrong “side because they got into this galaxy after it collided with the Small Cloud.It turned out that they started moving in this way after the LMO merged with the third object “Said Benjamin Armstrong of the University of Western Australia in Crowley.

The Milky Way is in space not alone, but in the company of a whole suite of several dozen relatively small dwarf galaxies, the most notable and large of which are the so-called Large and Small Magellanic Clouds – two relatively small “families” of stars whose diameter is about 13- 14 thousand light years.

As Armstrong notes, these galaxies have long attracted the attention of astronomers with their irregular shape, which testifies to the collisions of the Big and Small clouds in the past, and also the unusual manner of rotation around the Milky Way, unlike the way its other satellites move.

Armstrong and his colleague Kenji Bekki found out how these anomalies arose and discovered traces of another Milky Way satellite that died in a relatively recent cosmic past, studying several “strange” stars that live inside the Great Magellanic Cloud.

These luminaries, according to astrophysicists, have several unusual features at once – they contain the “wrong” number of astronomical metals, elements heavier than hydrogen and helium, and revolve around the center of the LMC along a very strange trajectory. Both those and other anomalies are related to them with the stars of the Small Magellanic Cloud, which makes many scientists think that they came to their current homeland during one of the clashes between the LMO and the IMO.

Recent observations of such “strange” stars have shown that about 5% of the total number of luminaries of the Large Magellanic Cloud behaves in a similar manner. This, as Armstrong notes, immediately questioned theories about their origin, since so many luminaries could not “escape” from the IMO during its last “meeting” with LMOs.

Trying to find the answer to this question, astronomers created a computer model of the nearest neighborhoods of the Milky Way and scrolled back a few billion years, analyzing how the Large Magellanic Cloud behaved during this time.

As these calculations showed, such stars could appear inside the LMC only if approximately three billion years ago this galaxy “ate” another object similar in shape and size to both Magellanic clouds.

A similar scenario, as Armstrong notes, also explains some other oddities of the LMC, including why there are globular clusters in its outskirts, consisting of both young and extremely elderly stars.

If this is true, then we can talk about one interesting thing – it is possible that most of the “suite” of the Milky Way was a single entity even before the “meeting” with our Galaxy. In favor of this is the fact that LMOs and MMOs have “common” reserves of dark matter, as well as many other factors, scientists conclude.