The largest space structure is contrary to all cosmological principles 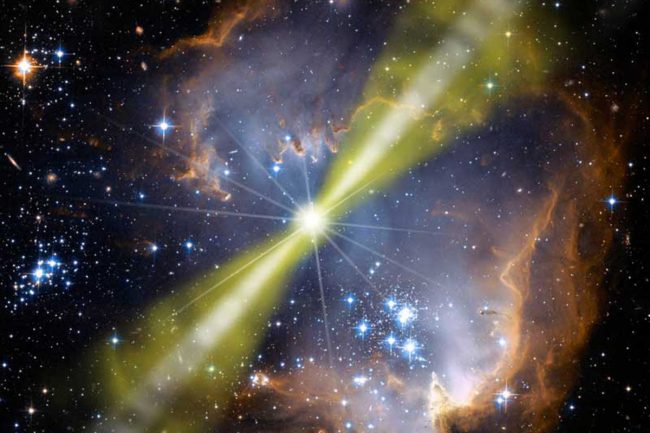 According to an article published in the scientific journal, Monthly notes of the Royal astronomical society (Monthly Notices of the Royal Astronomical Society) astronomers discovered largest cosmic structure in the observable Universe. It consists of nine gamma-ray bursts, forming a gigantic ring with a diameter of 5 billion light years.

If this ring could be seen in the night sky from Earth with the naked eye, its diameter 70 times the diameter of the full moon. According to the lead author of the study, Professor Lajos Balash from the Observatory of Cocoa (Budapest), since each gamma-ray burst is located at a distance of about 7 billion light-years, the probability that these objects are located randomly, is 1/20 000.

The image of gamma-ray bursts (blue dots), forming a giant space structure of the ring-shaped

Detection of such a giant of a space object forces science to rethink their understanding of how actually appeared and evolved the universe. After all, according to the cosmological principle, the largest structure in the Universe is theoretically limited to a diameter of 1.2 billion light years. The new opening is almost 5 times more.

“If this ring actually represents the spatial structure, it should look flat because of the different distances of the bursts of gamma radiation, located in the center of this object. However, the ring itself can be a spherical structure in which all gamma-ray bursts occurred during the period of 250 million years, by the standards of the age of the Universe is almost simultaneous phenomenon,” says Balazs.

For its opening, Balazs and his team used the space telescopes and ground-based Observatory. Now scientists are looking for a way that will allow the cosmological principle and our knowledge about the formation of galaxies to explain the gigantic size of this structure. If the answer will not be found, theories about the formation of space will have to be completely reconsidered and rewritten.

“If we’re right, this structure is contrary to all current models of the Universe. To our great surprise the discovery of such a giant object. We still don’t understand how such a thing could exist.”