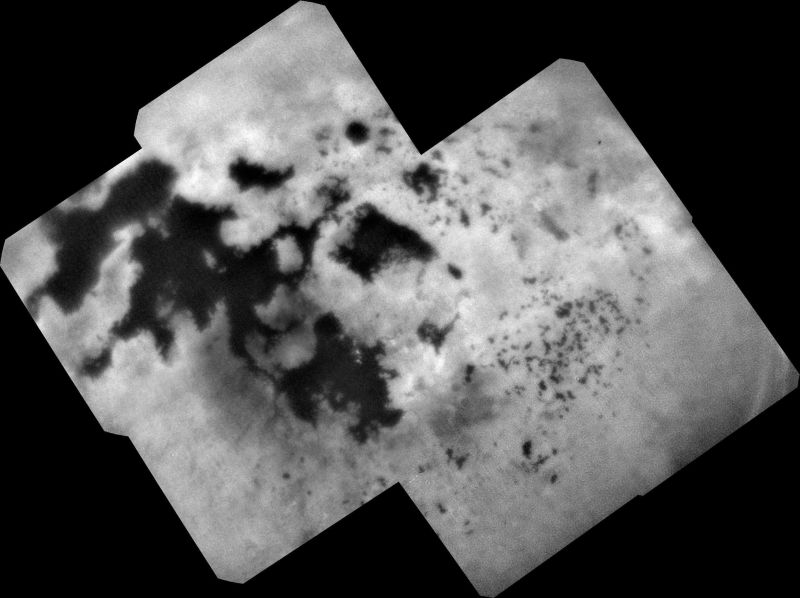 During the last approach of NASA’s Cassini (“Cassini”) to the giant Saturnian satellite Titan, the probe captured mysterious landscapes of the circumpolar regions of Titan, showing lakes and seas filled with liquid methane and ethane.

These images were taken on September 11, 2017. Four days later, “Cassini” was sent by scientists in the direction of Saturn for the final disastrous immersion in the atmosphere of a giant planet.

The sea of ​​Pungi (390 kilometers in size) is observed just above the center of this mosaic, the Sea of ​​Ligeia (500 kilometers in diameter) is below the center, and the giant sea of ​​Kraken stretches for 1200 kilometers on the left side of the mosaic. Numerous smaller Titan lakes can be observed around these seas, and they are scattered over the surface of Saturn’s moon on the right side of the mosaic. One of the most important undisclosed secrets of Titan is related to the formation of these lakes.

The images from which the mosaic presented here were made were obtained using a narrow-angle CASSini spacecraft ISS space camera using a spectral filter sensitive to infrared waves with a center of transmission at 938 nanometers.

These images were taken from a distance of about 140,000 kilometers from Titan. The scale of the images is approximately 800 meters per pixel. This image is an orthographic projection centered on 67.19 degrees north latitude and 212.67 degrees west longitude. The orthographic appearance is close to what the distant observer sees in the telescope eyepiece.