The light of a quasar hid hundreds of galaxies 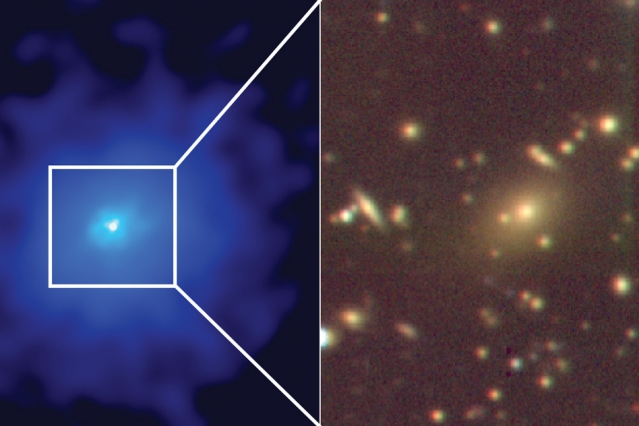 Scientists from the Massachusetts Institute of Technology (MIT) discovered a new vast cluster of galaxies that was previously unavailable for observation. The newly discovered galactic group is located at a distance of 2.4 billion light years from Earth.

It consists of hundreds of separate galaxies and surrounds an extremely active supermassive black hole.

The central quasar in this cluster is called PKS1353-341. It is extremely bright, so bright that astronomers who saw it in the night sky, considered that it is lonely located in a sparsely populated part of the universe. The thing is, he was shining like a solitary light source. As it turned out, just because of this quasar, scientists for a long time could not detect a gigantic cluster of galaxies, because he simply eclipsed his light with his light.

More interesting details of the new study were published in the popular scientific journal The Astrophisical Jurnal.

According to scientists, the mass of the entire galaxy is equal to the mass of 690 trillion suns. Our Milky Way galaxy, by comparison, is approximately 400 billion solar masses. Scientists also found that the above-mentioned central quasar is 46 billion times brighter than our Sun. Its extreme brightness is probably the result of temporary gluttony. The thing is that around him a lot of energy and matter are spinning, which feed him. In this regard, the supermassive black hole radiates an incredibly bright light.