The liquid water on Mars existed much longer than was thought 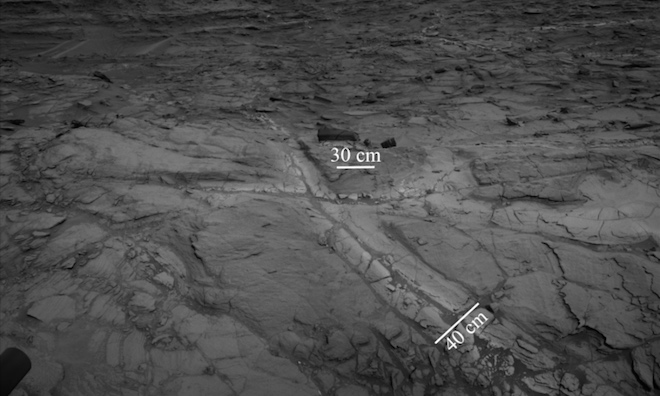 In the Gale crater on Mars around the cracks found bright radish with high content of silicon dioxide. These “halos” indicate that liquid water on the planet existed much longer than previously thought.

“In the middle lines of these halos, the concentration of silica is very high,” said the author of the study, Jens Friedenvan, a scientist from the Los Alamos National Laboratory and the University of Copenhagen. “Apparently, he migrated from very old sedimentary bedrocks to the younger upper ones.”

“The goal of NASA’s Kyuriosity mission was to find out whether Mars was ever livable and the rover found evidence of a lake with drinking water in Gale’s crater, but we still do not know how long such conditions lasted “The new discovery suggests that even when the lake evaporated, the groundwater was present much longer than we thought before, this fact extends the time frame for the possible existence of life on Mars.”

It remains to be seen whether this groundwater could maintain a stable life. A new study confirms the recent findings of another researcher from Los Alamos, who first discovered a chemical element of boron on Mars, which also indicates the potential for long-lived inhabited groundwaters in the past.

In the analysis of the aureoles, the laser instrument of the rover “Chemistry and Camera” (ChemCam), developed at the National Laboratory of Los Alamos in cooperation with the French space agency, was used.

“Kyuryoshiti” spent more than 1700 sols (Martian days) on Mars, having traveled more than 16 km. During this time, he rose from the bottom of the crater Gale to his central mountain Sharpe. Scientists use all the data collected by ChemCam to supplement the picture of the geological history of Mars.

A large amount of silica in halos was found at an altitude of about 20 to 30 m at an elevation near the layer of rocks of ancient lake sediments. “This suggests that the silica found in halos, most likely, was transferred there from the old sedimentary rocks with water flowing through the cracks,” explained Friddenwan.

In particular, some of the rocks containing halos are probably besieged by the wind, like dunes. Such dunes could exist only after the drying of the lake. The presence of halos in rocks, formed much later, indicates that the groundwater flowed in the rocks not so long ago, as previously thought.