The main antimatter factory in the Galaxy was discovered 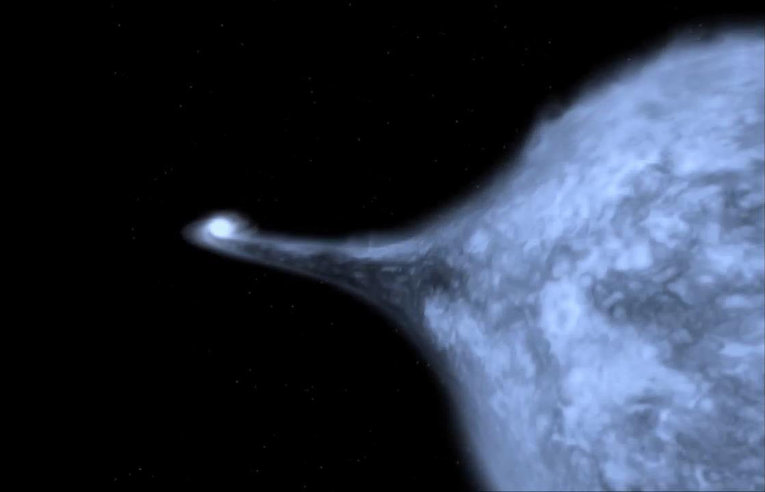 All the antimatter of the Galaxy, the traces of its decays are constantly fixed by NASA’s space telescopes, can arise when supernova explosions occur when white dwarfs merge.

“These observations allowed us to uncover the secrets of the most unknown part of the Milky Way, where the oldest stars live.When the pairs of white dwarfs converge too much, the larger star” tears “part of the matter from its smaller satellite and turns into a thermonuclear bomb, All the antimatter of the Galaxy, “explains Roland Crocker of the National University of Australia in Canberra.

When Soviet and American astronomers launched the first space telescopes into Earth’s orbit, observations of the Galaxy in the gamma and X-ray range presented a big surprise. It turned out that the central part of the Milky Way produced large quantities of high-energy photons that can only appear during the decay of antimatter particles.

The search for sources of this matter has been going on for almost 50 years. To their role today, claim two objects – “thermonuclear” supernovae and super-gluttonous black holes-microquasars. In the first case, antimatter arises when isotopes of certain elements are formed, decaying into lighter nuclei and positrons, and in the second – as a result of collision of light particles and their transformation into antimatter.

According to Crocker, a long search for traces of antimatter formation, and in fact, and under another scenario, actually led to nothing. The number of known microquasars in the center of the galaxy is extremely small – we know only four such objects, and in the case of supernovae scientists it was not possible to find a plausible antimatter production mechanism. Therefore, some astronomers today believe that it arises more exotic ways – as a result of the decay of dark matter or in the vicinity of the supermassive black hole Sgr A *.

Crocker’s team found a way out of this situation, following what elements arise as a result of supernova explosions of the first type. Similar outbreaks, as the astronomers say, arise as a result of the fusion of pairs of white dwarfs. The unification of their matter leads to a “full” thermonuclear explosion, after which there is not even a trace left of the stars.

The temperatures inside the depths of such dwarfs during the explosion are so high that they actually form the entire periodic table, including unstable elements, whose decay leads to the formation of not only matter but also antimatter. They, as the scientists say, are nickel-56, titanium-44 and aluminum-26.

After analyzing how these elements arise and disintegrate, Crocker and his colleagues came to the conclusion that titanium-44 is the ideal candidate for the role of the main source of antimatter of the Galaxy. Its number and frequency of decay very accurately fit into the data on the amount of antimatter in the center of the Milky Way, and its particles, arising in the course of decays of titanium-44 nuclei, will be dispersed to the “correct” speeds, the researchers explain.

In the past, according to Crocker, titanium-44 was not considered a candidate for the role of “main supplier” of antimatter because its main source was considered to be ordinary supernovae arising from the gravitational collapse of large stars that had exhausted their hydrogen and helium reserves. They produce about four times less titanium-44 than necessary to explain the presence of antimatter in the core of the Milky Way.

As calculations of scientists show, this problem can be solved if the main source of titanium is supernovae of the first type, arising from the fusion of two different white dwarfs, one of which will consist almost entirely of helium, and the second of carbon and oxygen. Such explosions, as observations of supernovae show, occur about once every 500 years, their titanium-44 produced should suffice to cover this defect.