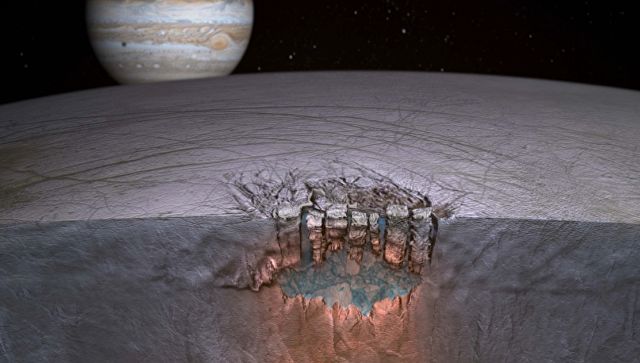 Mission engines “Europe Clipper” can prevent NASA to find life traces on Europe, the satellite of Jupiter as they will cover her surface with a large amount of ammonia and other organic molecules which will hide signs of existence of alien microbes.

“People and politicians want that we have sat down on the surface of Europe, have drilled a hole and have caught fish there. It, of course, extremely malorealistichno – at best we will land and we will find molecules of a biological origin, or just life “bricks” there. We will need to drill ice on depth in 10 centimeters or meter to leave from a nitric trace of engines of the landing module” — Britney Schmidt, one of participants of a mission of Institute of technology of Georgia (USA) has declared.

NASA works more than five years on the project of the interplanetary station “Europe Clipper” which has to become the second spaceship after the probe “Galileo” which will visit vicinities of the most mysterious and interesting moon of Jupiter, Europe to scientists. In May of last year has decided by NASA on the list from nine scientific tools which will go together with the probe to Europe, and has told about them to public.

This year the Congress of the USA unexpectedly for scientists has declared determination to expand financing and to send not one to Europe, but two probes within the mission “Europe Clipper”, one of which will make landing to the ice moon of Jupiter and will take away tests from her surface.

The similar procedure as Schmidt and other planetologist, Ralf Lorentz from John Gopkins’s (USA) university tell, will be complicated by the fact that the landing module of “Europe Clipper” should use engines for braking and implementation of soft landing to the surface of Europe.

The majority of the landing systems existing today or earlier used used for these purposes the fuel or oxidizers comprising large amounts of nitrogen – for example, asymmetrical dimethylhydrazine or nitric acid.

Their use as Lorentz notes, will make searches of traces of life on the surface of Europe actually impossible as engines of “Europe Clipper” will cover ice of the moon of Jupiter with a set of molecules of ammonia and other compounds of nitrogen which in principle can make or consume microbes.

Therefore as Schmidt considers, the probe has to be equipped with the drilling rig which will allow to receive ice samples with possible traces of life from deep layers of ice where the flame of engines can’t get.

As Peter Willis from Laboratory of jet propulsion of NASA has declared, other way to avoid this problem – landing of the module by means of the system similar to SkyCrane which has lowered the Curiosity mars rover to Mars in 2012. In that case the landing system will soar at big height over the surface of Europe, and will lower the probe on her on cables that will allow to avoid pollution of ices ammonia and other organic chemistry generated by engines.

Time for acceptance the decision still is — according to plans of the Congress of the USA, has to send to NASA “Clipper” to Europe not later than 2022, and a lender – not later than 2024. The total cost of this project isn’t set yet, however it, with very high share of probability, will exceed one billion US dollars.