The marble clouds of Jupiter 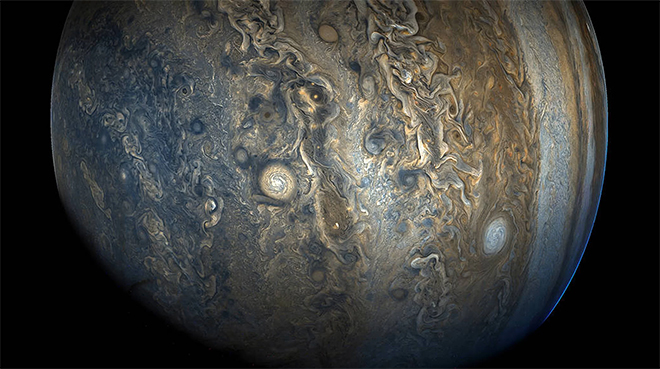 A new image from the NASA spacecraft “Juno” shows a sea of ​​colorful climbing clouds on the southern hemisphere of Jupiter.

The image is based on data obtained by JunoCam on October 24, when the interplanetary station “Juno” made its ninth approach to Jupiter, according to NASA. The findings were downloaded to the JunoCam site, from where they were taken by scientists Gerald Eichstadt and Sian Doran for further processing.

The picture shows the tangled currents that the Juno discovered in the cloud peaks of Jupiter. When the picture was taken, the spacecraft was at an altitude of 33,115 km and at a latitude of minus 52.96 degrees ..

“Juno,” circling around Jupiter, is approaching the planet for only a few hours, every 53 days. The spacecraft makes a loop around the planet, crossing it perpendicular to the equator along the poles. The northern hemisphere of the planet was also displayed by JunoCam.

The instrument can not take pictures during the entire span, therefore, with every approach, civil scientists are invited to vote for which areas the JunoCam should target.