The mass ejection from the outbreak X9.3 is directed to Earth 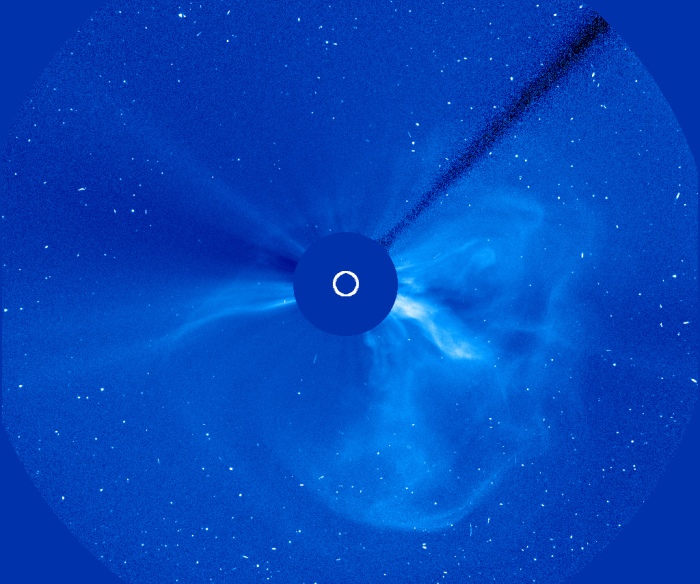 During the recorded on the eve of the solar flare X9.3, a large release of the solar matter occurred, and it is directed to the Earth. This is evidenced by data received from cosmic solar coronagraphs – unique instruments that observe the outer layers of the solar atmosphere and plasma flows in them.

The speed of the ejection is currently being refined, but, proceeding from the usual values ​​for such events – at least 1000 km per second – tomorrow, clouds of plasma will be coming to our planet, thrown out of the atmosphere of the Sun by the colossal force of the explosion.

The characteristic size of such clouds when they reach the Earth’s orbit is up to 100 million kilometers and more. This means that, in addition to impact on the Earth’s magnetic field, our planet expects to dive for 1-2 days into a red-hot substance, which was yesterday a part of the Sun’s atmosphere.

The exact strength of the consequences of the impending impact on the Earth is difficult to predict so far, since it depends on the direction of the magnetic field frozen into the cloud. In those cases when the direction of the magnetic field of the ejecta at the point of its contact with the Earth’s field is the same as that of the earth’s field, the impact effects are minimal.

In such cases, the earth’s field is “punctured” under attack, but still does not let the solar plasma inside. However, situations are possible where the lines of the magnetic field of the ejection are directed opposite to the lines of the Earth’s field.

In this case, the lines of force attacking the earth begin to “burn” (destroy) the oppositely directed lines of the Earth’s field, after which the solar plasma rushes into the formed rupture of the magnetic shield and fills the Earth’s magnetosphere.

It is in such cases that the particles invading the magnetosphere cause polar auroras, not only in the field of polar caps, but across the entire planet, including even to the equator.

Predicting the direction of the magnetic field of the ejection is the most complex element of the forecast of space weather. Currently, the world observatories have formed a preliminary forecast of space weather for the next three days, which even without taking into account the direction of the magnetic field predicts at least 24 hours of strong magnetic storms in the next 72 hours.

In the event that the direction of the ejection field is still unfavorable for the Earth, our planet is likely to face the largest magnetic storm. The arrival of solar matter to the Earth is predicted for the evening of September 8.