The modern lithosphere of Venus is cracking 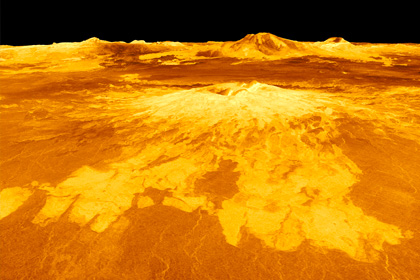 French and American scientists have shown that the modern lithosphere of Venus is cracking and resembles the ancient earth’s crust.

Specialists under laboratory conditions reproduced conditions that, in their opinion, are characteristic of the interior of Venus. In particular, scientists in a colloidal solution of nanoparticles created analogs of mantle plumes – the fluxes of hot mantle, rising from the core to the core, which thin the lithosphere from the inner side of the planet.

Laboratory studies have shown that in some places the mantle can escape to the surface of the planet, and its spreading over the bark can provoke subduction – the immersion of one section of the lithosphere under the other.

The laboratory data of scientists are confirmed by the observations of Venus, in particular, by the existence of the crowns of Quetzalpetlletl and Artemis, which probably arose from the activity of mantle plumes.

A study of scientists shows that some elements of tectonic activity, in particular, subduction of fragments of the planetary crust, can be present on Venus. Specialists believe that at present the lithosphere is the second remotely located from the Sun of the planet of the system like an ancient earth crust. Investigation of the processes taking place on Venus will allow scientists to understand the mechanisms by which tectonic activity on the Earth has arisen.