The moon of Pluto is covered with pure water ice 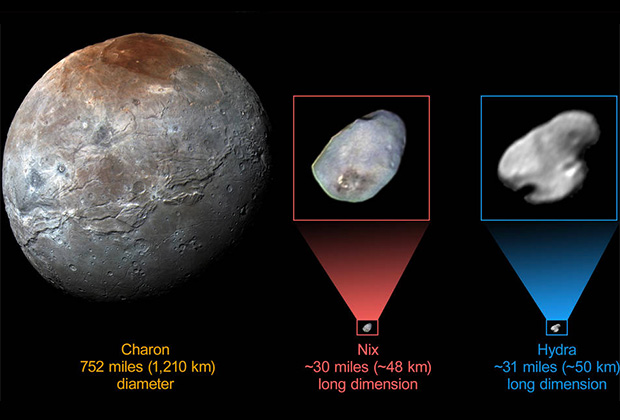 Obtained automatic station New Horizons data provide compelling evidence that the surface of NYX is almost completely covered with water ice. Previously to the same result reached by scientists who have studied another moon of Pluto — Hydra.

The surface of NYX were covered with coarse particles of water ice. This means that the ninja emerged from the cloud of icy debris. Similar conclusions (about the structure of the surface and the origin) valid for the three other satellites of the irregular shape of Pluto — Hydra and probably the Styx, and Cerberus (the latter two celestial bodies were not investigated in detail New Horizons, but their reflectivity indicates the presence of the ice surface).

The study raises new questions. The depth of absorption peaks in the spectra of NYX and Hydra are different, despite the relatively equal sizes of these heavenly bodies (about 50 kilometers in diameter). In addition, the reflectivity of the second moon a little higher than the first.

The data are obtained on July 14 2015 scientific tool LEISA (Linear Etalon Imaging Spectral Array) station New Horizons when she was at a distance of 60 thousand kilometers from NYX. At the same time the unit did the satellite with a resolution of 3.7 kilometers per pixel.

Previously, NASA demonstrated the mountainous region KRUN Macula, named in honor of the mandaic God of the underworld, having the form of a giant louse. Shown the Agency a portion of the surface of the dwarf planet has a reddish hue due to covering his Tulinov. He KRUN Macula rises to a height of about 2.5 kilometres on the surrounding plateau of the Satellite.

Station New Horizons July 14, 2015, at about 14 kilometers per second close to Pluto on the minimum distance of 12.5 thousand kilometers. At this time the peak of research.

The mission should complete its work in mid-2020. the Main objective of the New Horizons program is to study the dwarf planet Pluto and its satellite Charon. Scientific equipment installed at the plant, we collected data on the atmospheric composition and structure of Pluto’s surface and its interaction with Charon.