The most insane space ideas of NASA 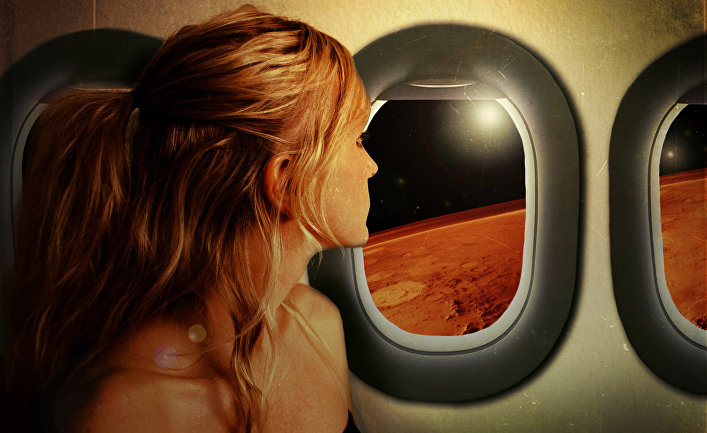 One special NASA program is aimed at supporting ideas that can radically change the way we study outer space. This year, among other things, it was proposed to plant Mars and fly to Jupiter using laser beams.

How about a spacecraft with a laser engine that can reach Jupiter for a year?

And what about a human-made bacterium that will turn the poisonous surface of Mars into agricultural land in the sky above which a vacuum airship will float?

It sounds like science fiction, but it’s all projects that receive financial support from the American space organization NASA. The fact is that NASA always searches for innovative ideas, which in the future can be improved, accelerated and desirable – even cheaper to explore the world’s space.

Each year NASA allocates money for ideas that can make space exploration faster, better or cheaper.

15 projects have been selected this year, and you can read about some of the most interesting ones here.

The NIAC program (“New Innovative Concepts of NASA”) has tools that can be spent on ideas that at first glance seem pretty fantastic – the main thing is that they are purely technical and scientific were not quite wild on closer inspection.

Everyone can apply for a project that can revolutionize space travel and explore celestial bodies. If your project is selected, you can first (phase 1) get 125 thousand dollars, that is 826 thousand kroons, to develop the idea within nine months.

If you like NASA, then go to phase 2 and you can spend two more years and half a million dollars (3.3 million kroons) for further work on the concept. And it can happen that NASA decides to make it real.

In 2017, NASA selected 15 projects for phase 1, and seven projects moved to phase 2. All of them are American, although applications from other countries are also accepted. Many ideas came from research centers and universities, but some from private firms.

Adam Arkin of the University of California wants to create microorganisms that can make the soil of Mars less toxic and at the same time fertilize it by preparing for planting. If we happen to emigrate to a new planet, the opportunity to grow food on it will be a big advantage. 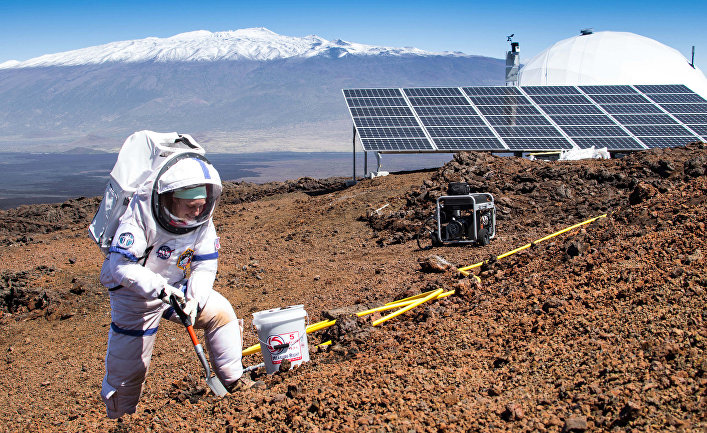 Martha Lenio, who led the team of scientists who lived under the dome for eight months on the slope of a sleeping Hawaiian volcano in similar Martian conditions

First of all, we are talking about neutralizing perchlorates – chlorine-containing chemical compounds that are unfavorable for life.

If simultaneously it is possible to create ammonia used in fertilizers, we will make a big step from the barren red planet to flowering and green.

The soil of Mars has been studied

It sounds like a matter of a really distant future, but with something you need to start if you want to be able to feed the population of Mars.

The expert on Mars Kjartan Kinch, a teacher at the Niels Bohr Institute at the University of Copenhagen, also does not think that the idea sounds absolutely insane:

“Of course, this is a very long-term pilot project. It is obvious that many years will pass before people settle on Mars, who will prepare the earth for cultivation.

But we know quite a lot about what the soil on Mars consists of – our knowledge is enough to recreate realistic conditions in the laboratory. ”

That is, the soil of Mars can be modeled in the laboratory, and also create a Martian environment, for example, with the necessary pressure and radiation.

The big question, however, is whether it will be possible to create microorganisms that will not only survive in harsh environments, but will also be able to make the soil fertile.

All the ideas of the NIAC project are united by the fact that their implementation may require many years in the future.

John-Paul Clarke of the Georgia Institute of Technology has the idea of ​​building a vacuum airship to explore Mars from the air. Here on Earth we fill balloons and dirigibles with helium, which makes them lighter than air, but if it were possible to create an airship with a void inside, it would be even lighter, which means that it would have a greater carrying capacity.

Here, on the globe, this can not be done. The vacuum airship simply would not work, because the air pressure is too high and there are no materials for construction, strong enough and light enough: the airship will either crash under pressure or be too heavy to fly.

But on Mars the atmosphere is much more sparse, and therefore the idea with a solid shell from which to extract the air of Mars is not bad and can facilitate the work of scientists.

A vacuum airship could fly everywhere and explore the surface, and the flight altitude would be adjusted by pumping more or less air with an electric pump powered by solar panels located at the top. Solar panels can also provide a forward motion so that the airship moves not only downwind, and in principle it could be used to transport goods and people on Mars.

On Jupiter with a laser

Some of the projects are devoted to how to get to distant goals. For example, the proposal of John Brophy (John Brophy) of the Jet Propulsion Laboratory of NASA. He believes that people can get to Jupiter for a year, using the energy of a huge laser system located in the Earth’s orbit.

With the help of a laser, it is possible to supply energy to the solar batteries of a spacecraft, and there is enough sunlight right up to Jupiter. Electricity with solar panels will service the ship’s ion engine. 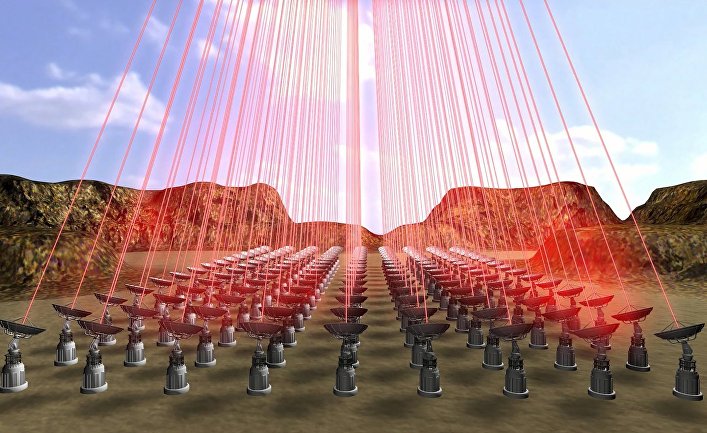 Land-based lasers designed to impart inertia to the spacecraft

A 10-km diameter laser with a capacity of 100 megawatts will be able to provide enough energy to transport a small unmanned spacecraft to Pluto for 3.6 years, and a larger 80-ton spacecraft might, with people on board, arrive in Jupiter’s orbit in a year .

A little closer to Earth, we could use spacecraft to collect space debris and send it to the burning. This is the concept of Brane Craft of The Aerospace Corporation.

The firm came up with a relatively light, flat and flexible spacecraft with an area of ​​one square meter, which moves thanks to fairly small ion engines.

He will collect space debris and drag him down into the atmosphere, where he will burn.

Other NIAC ideas that received support this year include suggestions on how best to take pictures of exoplanets, how to study Venus closely and much more. The entire list can be seen on the NASA website.