The mystery of the dark matter galaxy unraveled 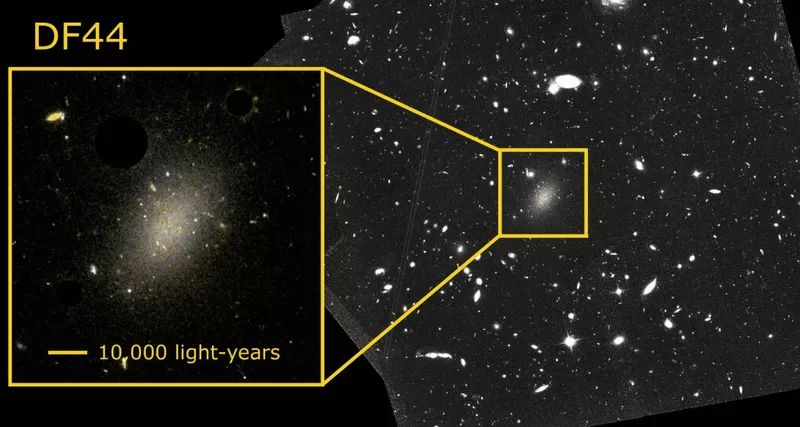 Astronomers were able to accurately measure the number of globular clusters around the Dragonfly 44 galaxy, in which anomalously high amounts of dark matter were previously detected. It turned out that the galaxy is not so anomalous.

A few years ago, researchers found a galaxy that is 99.9% dark matter. Now it turned out that the galaxy is quite ordinary. It was just necessary to take more accurate measurements.

Dark matter is a mysterious substance that surrounds galaxies and stars. It makes up most of the mass of our Universe, according to researchers’ calculations. Astronomers have previously shown that the amount of dark matter in galaxies is on average 10 to 300 times greater than that of ordinary matter.

But a few years ago, scientists discovered an object in the constellation Coma Veronica, in which there was 10 thousand times more dark matter than normal. This puzzled the researchers, since, according to existing theories, such galaxies cannot exist.

In a new paper published in the Monthly Notices of Royal Astronomical Society, scientists have conducted the most accurate analysis to date of the number of globular clusters in the Dragonfly 44 galaxy. As a result, the authors found that there are only 20 globular clusters around the object, and the total amount of dark matter is about 300 times the amount of ordinary matter. This value is only slightly higher than that of other galaxies of a similar type.

The total number of globular clusters is related to the total mass of the galaxy. Thus, if you measure the number of such clusters, you can calculate the fraction of dark matter. This is most accurate if the amount of visible matter is only a small fraction of the total mass of the galaxy. This is what happened in the case of Dragonfly-44. According to scientists, although they observe this connection between the number of globular clusters and the proportion of dark matter, it has not yet been explained.