The mystery of the origin of binary star systems 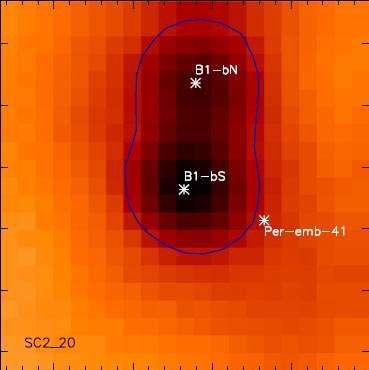 The origin of binary star systems has long remained one of the central problems of astronomy.

One of the main questions is how the mass of a star influences the propensity to form multiple systems. A significant number of studies of young stars inside molecular clouds have been carried out, but the influence of a large number of other factors has not led to convincing results.

For example, in some studies it has been shown that younger stars can often be observed in multiple systems. One of the problems of all these studies can be considered relatively small sample sizes of the studied stars.

In a new study, an astronomer from the Harvard-Smithsonian Astrophysical Center, USA, Sarah Sadavoy and her colleagues used combined observations of young stars in the Perseus cloud in the radio range and observations in the submillimeter range of dense cores of material around these stars to identify 24 multiple star systems.

Then scientists used the data obtained in the submillimeter range to identify and describe the dust cores within which these stars are located. The researchers found that basically the investigated multiple systems are located near the centers of the dust cores, that is, they had not yet managed to move far from the “place of birth”.

Modeling based on the results of this analysis showed that most of the young stars are formed in widely separated stellar pairs, but more often such systems decay, which leads to the formation of single stars.

Some systems, on the contrary, become more closely related. Although this idea was already voiced earlier by other scientists, this new study is different in that it confirms these conclusions on a rather large sample of very young stars still surrounded by dusty cores.