The mystery of the star system ETA Carinae 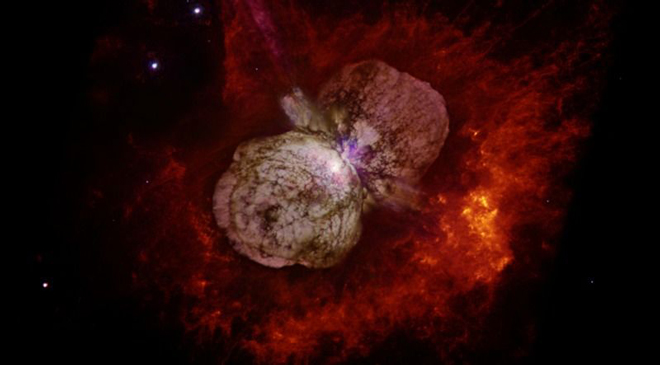 Star system ETA Carinae has been a mystery for astronomers for centuries. Scientists could not understand the cause of the change in brightness double stars, for example, a striking flash in the XIX century, is very similar to the supernova explosion.

Astronomers from the University of Arizona (USA) found that ETA Carinae “flashed” at least two more times to the nineteenth century, but remained alive.

Star may become a supernova in two ways. If the star is large enough, it collapses on itself when it runs out of fuel. When the outer layers hit the core, the star explodes, it spits out the remains in the surrounding space. The second option substance accumulates on the white dwarf until the layer becomes so dense that it causes an explosion.

Neither scenario is not suitable for This Keel. In the mid 1800s, the star system became so bright that outshines the other stars in the night sky, and then faded. Everyone was talking about the supernova explosion and gas and “debris” that created the Homunculus nebula. But ETA Carinae is not dead. Again she was very bright in 1890, then in 1953 and dramatically doubled its brightness in 1998-1999.

“ETA Carinae is a supernova impostor,” says Megan Kiiminki from the University of Arizona. Star was very bright when she threw a lot of stuff in the 1800’s, but she’s still here.”

Measurements of the movement of 800 gas bubbles ejected star system, scientists have calculated the probable date of the explosions. The team from Arizona found evidence of two early pseudotribos supernova – in the XIII and XVI centuries.

Researchers have determined that ETA Carinae is a binary system with two huge stars orbiting around one another. The larger star of the system is in the final stages of life.