The NASA discovered a mysterious disappearing storm on Neptune 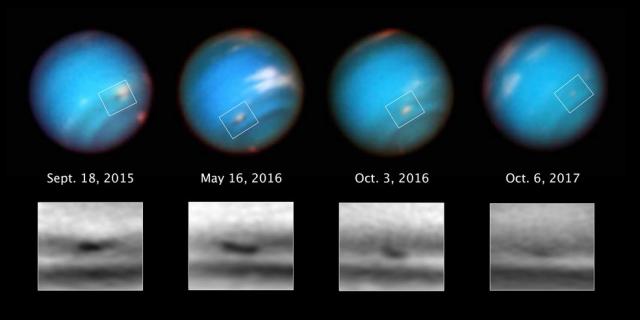 The Hubble Space Telescope documented the gradual disappearance of an unusual storm on Neptune. The storm for two years of observation has decreased in size from 5 thousand km to 3,7 thousand km, reports NASA.

The huge dark storms on Neptune were first discovered in the late 1980s by the NASA Voyager 2. Since then, only Hubble has had the opportunity to see these formations in the blue zone of the spectrum. In the mid-1990s, Hubble discovered two storms that later disappeared. The last time a space telescope observed such a formation in 2015. Now it quickly disappears.

Like the Great Red Spot of Jupiter, a storm on Neptune is an anticyclone, lifting matter from the depths of the planet’s atmosphere.

According to scientists, dark spots on Neptune contain hydrogen sulphide. Spot-forming particles have a high reflectivity. They are only slightly darker than the surrounding atmosphere.

If the Great red spot on Jupiter has been observed for at least 200 years, then the vortexes on Neptune live only a few years. Thanks to Hubble, researchers were able to observe for the first time how the storm decays. According to scientists, dynamic simulation has previously shown that the anticyclones on Neptune are moving towards the equator. Experts believed that as soon as the vortex approaches close to the equator, it disintegrates, and this event is accompanied by explosive cloud formation.

However, the dark spot observed by Hubble, visible in the middle southern latitudes, apparently began to disappear gradually. Perhaps this is due to the unexpected for the scientists movement of the storm towards the South Pole, and not to the north towards the equator.