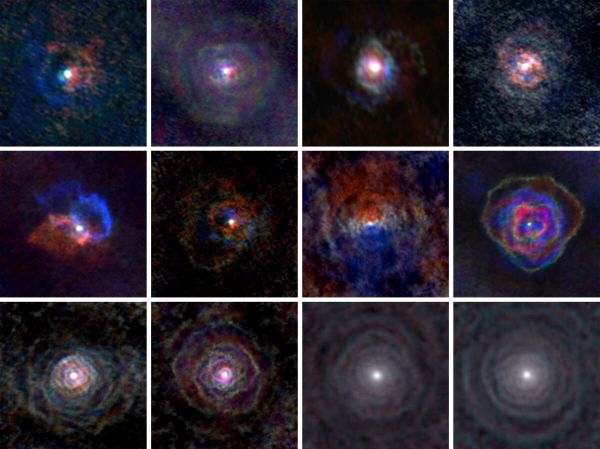 Astronomers have provided a new explanation for the rich variety of shapes that planetary nebulae take. This discovery is based on multiple observations of stellar winds blowing in the vicinity of aging stars. Contrary to popular belief, the team found that stellar winds should not have spherical symmetry, but would instead take on a variety of shapes close to those of the planetary nebulae themselves. The team also concludes that interactions with a nearby star or even a planet could affect both the shape of the “rose” of the stellar winds and the shape of the planetary nebula they form.

Dying stars swell and cool, eventually becoming red giants. They produce stellar winds, streams of particles erupting from a star, as a result of which they lose mass. Due to the lack of detailed observations, astronomers previously believed that the intensity of stellar winds in all possible spatial directions is approximately the same, that is, they have spherical symmetry. As the star evolves, it heats up again, and the stellar radiation leads to the glow of previously pushed out layers of material, as a result of which a planetary nebula is formed.

But if stellar winds are spherically symmetric, then where does such a rich variety of planetary nebula shapes come from? This question was posed by a team led by Leen Decin of the Catholic University of Leuven, Belgium. After analyzing the movement of stellar winds around the cold red giants using the ALMA radio observatory located in Chile, scientists noted that the distribution of winds in almost no case was spherically symmetric. Then the authors of the work identified the forms of distribution of stellar wind streams and found that these streams can form disk, spiral and conical structures. The correct shapes of these structures led the team to believe that these shapes are not random, and that the reason for their diversity lies in interactions with other, small stars located in the vicinity of a dying star, or even with the most massive planets.

Since the irregularity of the distribution of stellar winds in directions was previously not taken into account when modeling the evolution of stars, these new results will lead to a revision of a number of models. The rate of mass loss by a dying star in some models can change by a factor of 10 or more, the authors noted.

Also in the work, Decin and his colleagues note that, given the presence of a “rose” of stellar winds, our almost perfectly spherical Sun, after passing through the red giant phase, will not form a spherical nebula, but something more like a spiral.

The research is published in the journal Science.